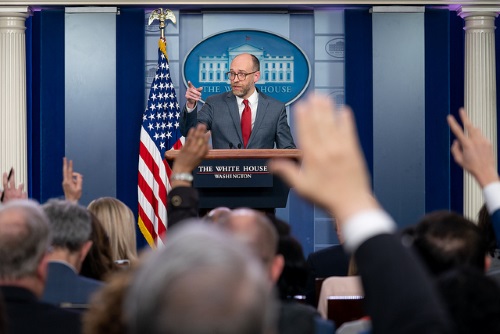 The $4.75 trillion fiscal year 2020 budget for the federal government proposed by President Trump on March 11 seeks to rollback non-defense discretionary funding to 2011 levels and eliminating the $10 billion boost for infrastructure provided by Congress in both FY 2018 and FY 2019. At the same time, the proposal continues to seek an additional $200 billion from Congress to fund an infrastructure package.

Russell Vought (seen above), acting director of the Office of Management and Budget, noted during a press conference with reporters on March 11 that “unsustainable national debt, which has nearly doubled under the previous administration and now stands at more than $22 trillion” with annual deficits poised to keep rising and will exceed a trillion dollars a year.

“It’s projected that interest payments on the national debt will exceed military spending by 2024,” he noted, which is why Vought said the FY 2020 budget “contains nearly $2.7 trillion in savings.”

Part of those savings come from a 5 percent reduction to non-defense discretionary spending President Trump requested from all federal agencies for FY2019, he added, “and I’m proud to report to you that we have achieved that target.”

In terms of transportation spending, Vought noted that the highway trust fund “doesn’t have enough revenues coming into it [and] this budget looks at the baseline and assumes that to be the case.”

He said the FY 2020 budget commits to working with Congress on a long-term surface transportation reauthorization bill as the current authorization, the Fixing America’s Surface Transportation or FAST Act of 2015, expires at the end of 2020.

“We must provide our state, local and private partners – who build, own and operate the vast majority of the nation’s surface transportation infrastructure – the long-term funding certainty they need to effectively plan and deliver projects,” Vought explained. “Such reauthorization must, at a minimum, address the long-term solvency of the Highway Trust Fund in a fiscally responsible manner, focus on nationally and regionally significant projects – emphasizing projects on the Interstate Highway System and other nationally strategic freight network – plus support emerging technologies and innovation.”

Yet he stressed that “we are totally ready and willing to talk with Congress about how to ensure that there’s additional dollars in the trust fund and to put forward additional $200 billion in new investment to make sure that it’s not just a surface transportation bill; that when we need money for broadband or other infrastructure, that is also something that we can pursue.”

According to an analysis by the American Association of State Highway and Transportation Officials, the “overall message” from the Trump administration via this FY 2020 budget request is that federal non-defense discretionary funding needs to be cut back to the 2011 Budget Control Act cap of $543 billion, compared to $597 billion in FY 2019.

At the same time, the administration continues to point out that infrastructure investment is a “priority area” by its calls for $200 billion in “mandatory spending” outside of USDOT over 10 years, of which $10 billion would support a Federal Capital Revolving Fund for more “cost-effective” federal investment in buildings and other property.

AASHTO’s analysis also noted that USDOT programs funded via the highway and airport and airway trust funds are “fully honored” in the FY 2020 budget, though there are several changes as well: