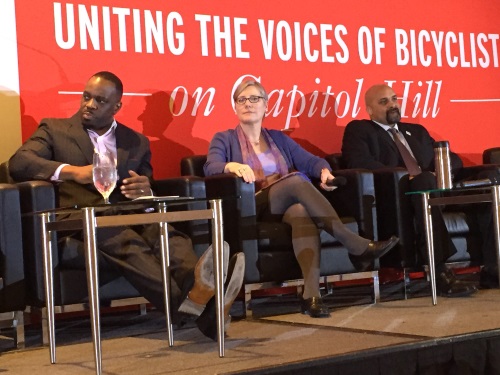 The recent growth in bicycle and pedestrian fatalities is placing renewed focus on “active transportation” safety efforts, according to three state department of transportation executives who spoke during a panel discussion at the National Bike Summit 2019, held March 9-12 in Crystal City, VA.

“The biggest thing that comes to mind, and one that is tough to tackle, is safety – if safety is going to be our number one priority, that needs to be reflected in our policies and funding [decisions],” explained Toks Omishakin, chief of environment and planning Tennessee DOT. “Unfortunately, the number of bicycle and pedestrian fatalities are increasing across the country – we cannot let them keep heading in that direction.”

According to the most recent benchmarking report issued by the League of American Bicyclists annually, bicyclist and pedestrian deaths rose from between 12 percent and 13 percent of traffic deaths to nearly 18 percent over the last decade; a statistic that includes bicycle commuter deaths as well as both bicyclist and pedestrian deaths that occurred while people were walking and biking for any purpose.

Meanwhile, according to research by Governors Highway Safety Association, pedestrian fatalities are expected to total 6,227 in 2018; a 4 percent jump from the 5,977 pedestrian deaths recorded in 2017 and the highest number in nearly three decades.

Barb Chamberlin, director of the division of active transportation for the Washington State DOT, noted that finding “common ground” between all transportation system users – motorists, bicyclists, and pedestrians – is one key to improving safety for everyone.

“It’s all about getting everyone home safely at the end of the day,” she said. “But I have to say we’re at such a polarized time in public discourse – everything is described as win-or-lose in transportation, meaning, if you get a bike lane, you took it from a car driver. What we need to do is reframe this discussion so everyone gets a win.”

Chamberlin said that while it will “take time to change legislative priorities and planning,” the “expectations of what streets should look like are changing. We’re now finally seeing studies to back up things we knew to be true, such as how lower rates of speed improve safety for everyone.”

Charles Glass, assistant secretary for transportation policy and planning at Maryland DOT, added that a new “planning perspective” may be needed to improve the safe integration of active transportation with other modes of travel.

“We need to think of this as a land-use issue, about where we populate people and grow communities,” he explained. “We need to think about how we grow as a society; where we live, work, and play – because if we live and work closer together, we have more room to play.”

Glass noted that, as a civil engineer, he thinks more “open streets” with low-grade barriers in “cities with grids” would not be expensive from a capital planning perspective and would provide more protection to bicyclists and pedestrians. “We can’t be having arguments over putting protected bike/pedestrian pathways across bridges, for example – they need to be part of the design from the outset,” Glass said.

That’s a perspective Tennessee DOT’s Omishakin endorsed. “If we want to get more people, especially novice riders, out and about on bikes we need more protected facilities,” he said. “If we think just striping and paint are solutions, that will not happen – especially on roads, in urban environments, where the right turning movements by cars can be a big danger to pedestrians and bicyclists.”

Jim Tymon, executive director of the American Association of State Highway and Transportation Officials, echoed those thoughts in a separate presentation on March 11 at the National Bike Summit 2019.

“Safety should be an easy issue to coalesce around – it should be easy to inform congressional members and staff on Capitol Hill of the importance of bicyclist and pedestrian safety as these are some of the most vulnerable users on our system,” he said. “That is why we’re supporting the inclusion of multimodal mobility considerations in AASHTO’s work and publications – including transportation design guides such as the Green Book. We need to make sure folks understand the positive impacts a well-functioning transportation system has on their quality of life.”

He added that, due to the “rapid proliferation” of new “personal mobility devices” such as scooters, AASHTO is broadening the scope of its Council on Active Transportation beyond bicycles and walking.

“Our state DOT members are no longer focused on just highways and roads; they’re emphasizing a multi-modal focus,” Tymon explained. “They are more focused on overall mobility needs; how can we get all modes of transportation to operate in a safe way to move people and goods most effectively and efficiently to their final destinations.”