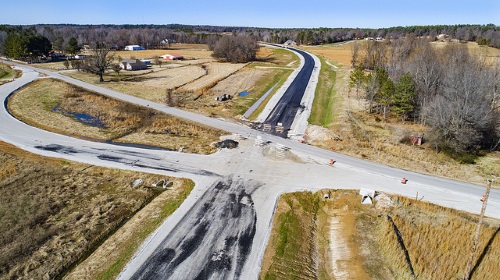 A new 43-page report issued by the American Road & Transportation Builders Association’s Transportation Investment Advocacy Center indicates 37 states have introduced 185 bills aimed at boosting transportation investment in the first two months of 2019, with 21 of those states proposing to increase one or more types of fuel taxes.

[Above photo by Arkansas DOT.]

Of those 21 states, 10 included altering or creating a variable-rate tax that fluctuates based on external factors such as the Consumer Price Index, average wholesale price of motor fuel, or other formulas.

Continuing a trend seen in recent years, the ARTBA-TIAC report indicates 16 states are introducing electric vehicle fees to help ensure all vehicles that create wear and tear on roads pay for their share of maintenance, with 10 of those states including an additional registration fee for hybrid vehicles.

Similar legislation is being pushed at the federal level by Sen. John Barrasso, R-Wyo., and Rep. Jason Smith, R-Mo. They re-introduced a bill on Feb. 6 that Sen. Barrasso initially proffered last October in the waning days of the 115th Congress.

That legislation seeks to end electric vehicle federal tax credits while imposing a fee on operators of all alternatively fueled vehicles – be they powered by electricity, natural gas, hydrogen, etc. – that will be collected over the next 10 years and paid into the Highway Trust Fund.

The ARTBA-TIAC report added that mileage-based user fee studies – also known as a road user charge or a vehicle miles traveled tax – are being considered in eight states, while four states have introduced legislation to implement tolling.

So far, of the legislation introduced in January or February, ARTBA said 19 measures have advanced beyond one legislative chamber, with one bill – an electric vehicle registration fee increase in Wyoming – signed into law. Meanwhile, Arkansas and Alabama signed fuel tax increases into law this month.