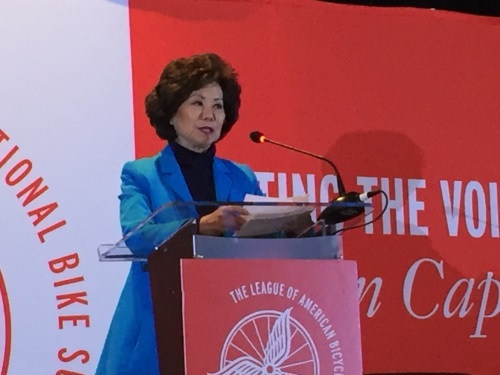 In speeches before the 2019 National Bike Summit in Crystal City, VA, March 11, and at the South by Southwest conference in Austin, TX, March 12, U.S. Department of Transportation Secretary Elaine Chao stressed that safety and innovation will remain the key focal points of her agency going forward as new technologies and mobility options come to the fore.

“Our country is in one of the most exciting periods of transportation history,” she said at the Bike Summit. “We’re witnessing the rapid expansion of e-bikes and e-scooters – with other potentially more transformative technologies still in the earlier phase of development, such as autonomous vehicles.”

Yet Sec. Chao stressed that the promise of automated vehicles won’t be fully realized if the “motoring public, bicyclists, pedestrians, and motorcyclists do not have confidence in this technology. We need to step up and address concerns about self-driving vehicles and how they can be made safer – we must continue to put safety first and embrace transparency.”

To that end, “for those of you who enjoy the road on bicycles, cars should not be what you fear the most – and we need to make sure self-driving vehicles are safe and deployed in a way that coexists with bicycles, pedestrians, and motorcycles,” she said.

Sec. Chao added that her agency plans to devote extra resources to the 16 states and 35 cities with highest numbers of bicycle fatalities, as well as focus on “crash modification factors” to develop better separated bike lane designs. “We’re also going to update our bicycle facility design course and make it web-based as well, [while] continue to provide funding for bicycle and walking projects thought state DOT programs,” she said.

In terms of improving USDOT’s ability to encourage innovation, Chao noted during her SXSW speech that her agency is creating a Non-Traditional and Emerging Transportation Technology or NETT Council; an “internal deliberative body” tasked with identifying and resolving “jurisdictional and regulatory gaps” that may impede the deployment of new technology, such as the hyperloop and autonomous vehicles, among others.

“New technologies increasingly straddle more than one mode of transportation, so I’ve signed an order creating a new internal council to better coordinate the review of innovation that have multi-modal applications,” she explained.

The NETT Council will address ensure that the 11 operating administrations within USDOT – each with its own traditional jurisdiction over certain environmental and regulatory approvals – do not impede the deployment of new technology. Furthermore, the council will give project sponsors a single point of access to discuss plans and proposals.

“Inventors and investors approach USDOT to obtain necessary safety authorizations, permits, and funding and often face uncertainty.,” she added. “The NETT Council represents a major step forward in reducing regulatory burdens and paving the way for emerging technologies in the transportation industry.”