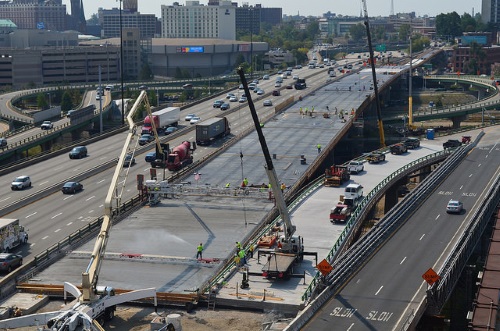 In a 17-page decision, Rhode Island U.S. District Court Chief Judge William Smith dismissed a lawsuit filed against the state’s tractor-trailer-only tolling plan, noting in his decision that those tolls are “a state tax to fund highway work” and, as so, the federal Tax Injunction Act or TIA prohibits his court from hindering states from levying taxes – adding that the plaintiffs need to file their case in state court.

[Above photo by the Rhode Island Department of Transportation.]

“Here, the facts are clear that the fees, while dubbed ‘tolls,’ are really a highly targeted and sophisticated tax designed to fund infrastructure maintenance and improvements that would otherwise need to be paid for by other forms of tax-generated revenue,” Judge Smith wrote in his decision. “As such, [this] court is without jurisdiction under the TIA; the federal case must be dismissed and ultimately heard in the courts of Rhode Island.”

The lawsuit – filed last year by the trade group American Trucking Associations, along with three individual motor carriers – aimed at getting Rhode Island’s truck-only tolling program declared “unconstitutional” as it “discriminates against interstate trucking companies and impedes the flow of interstate commerce.”

News reports indicated that the ATA is “reviewing the decision” and “considering next steps” as to re-filing its lawsuit to state court.

In a statement, Patrick Jones, executive director and CEO of the International Bridge, Tunnel & Turnpike Association, hopes a similar result occurs if the case against Rhode Island’s truck-only tolls is pursued in state court.

“IBTTA supports the state of Rhode Island’s plan to use truck tolls as one of many revenue streams to rebuild major bridges in the state,” he explained. “Large majorities of Americans support greater investment in infrastructure. While the judge who dismissed the lawsuit did not address the merits of the case, we remain hopeful that no court will deny Rhode Island, or any state, the ability to assess user fees including tolls to rebuild its vital bridges and highways.”