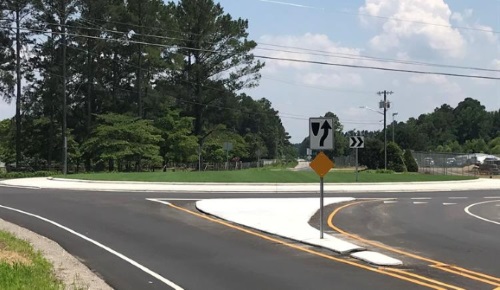 To better educate the general public about its plans to use roundabout intersection designs for upcoming highway projects, the North Carolina Department of Transportation used an informational video developed by engineering firm Stewart compiled in part with aerial footage captured via drones to visually explain to motorists, bicyclists, and pedestrians how to safely navigate them.

[Above photo by the North Carolina Department of Transportation.]

“People are increasingly relying on digital video for news, information, and public discussion. Videos, such as this roundabout informational video, are effective in engaging and educating,” explained Jamille Robbins, NCDOT’s public involvement and community studies group leader, in a statement.

“Watching a short video is easier than reading through a plan or report,” he added. “The greater utility of these types of videos is that they can be available 24 hours a day, seven days a week far beyond the timeframe of a traditional public meeting.”

The agency noted that roundabouts reduce the types of crashes where people are seriously hurt or killed by up to 82 percent when compared to traditional intersections, while reducing intersection design/build costs and improving traffic flow.

Yet despite such benefits, there is still “significant hesitation” among the general public largely as many remain unsure how to safely traverse roundabouts, noted Doug Taylor, Stewart’s vice president and transportation practice leader.

“Traversing one roundabout can be difficult for some but traversing more than one requires a higher comfort level for the public to be able to move through them safely,” he said. “The educational video we developed using drone footage was critical because without it, the public may not have been comfortable enough to select a design that included multiple roundabouts. Thus it was an important tool to help demonstrate to the public how the design would help reduce crashes, prevent congestion, and increase mobility.”

Taylor explained to the AASHTO Journal in a phone interview that Stewart’s geomatics group used a drone to provide an aerial overview of motorists and others traversing an existing roundabout in western North Carolina, then actually drove through the roundabout using bicycle equipped with a video camera to provide a “ground level view” of proper roundabout navigation.

That “driver’s eye view” combined with the “bird’s eye view” of the roundabout provided by the drone proved to be critical in securing public support for proposed I-77 intersection design, he stressed.

“We had people attend the public meetings who did not like roundabouts – and we found the video a lot of the time changed minds,” Taylor said. “While many were still unsure if they liked them or not, they said that by watching video, they understood how they would work and could see the safety benefit of keeping traffic flowing and not stop at traffic light.”

He added that Stewart hopes to use such videos more often in the future. “This is the first one we’ve done but looking for opportunities to create some for other projects we’re working on, such as an upcoming synchronized street project we’ve got,” Taylor said.

“This is one of things I point to as an ‘innovation’ in terms of how we reach out to the public – and it’s why we put it [the roundabout video] on YouTube,” he emphasized.

“I was with NCDOT for 30 years and I’ve been to numerous public meetings over my career and there’s nothing more important than getting the public on board with what you are doing. If you don’t, you’ll have ongoing issues throughout the process,” he explained. “So anything we can do to make it [the explanation] more visual can save everyone a lot of grief. Video makes it easier for the to understand how [new roadway designs] are going to work.”