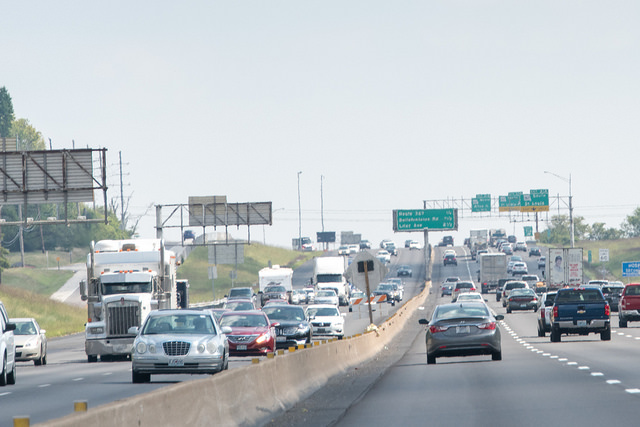 Though average U.S. commuting times remain “surprisingly stable” over the long-term – averaging roughly 26 minutes, according to the U.S. Census Bureau today, which is only about five minutes longer compared to the 1980s and 1990s – a new study indicates “significant shifts” are taking place at the extreme ends of the commuting spectrum.

[Above photo by the Missouri Department of Transportation.]

The study, issued March 14 and compiled by Apartment List, found that 3.5 million Americans – some 2.9 percent of the full-time working population – are “super commuters” who travel more than 90 minutes to work each way and their numbers have increased by 31.7 percent since 2005. At other end of the spectrum, 5.6 million Americans now work from home full-time, the report found – a number that’s grown 76 percent over the last 14 years.

As of 2017, the median American worker employed full-time outside the home with a commute of less than 90 minutes earned $43,000 annually, they said, while the average “super commuter” earned $52,000 – some 20.9 percent more than those who spent less than 90 minutes commuting each way. However, those, working from home enjoyed an even greater wage premium of 28 percent as their median income hovered at $55,000.

“The keys today are more disparate, with multiple factors at play,” AASHTO’s report noted. “Instead of a single dominant pattern, demographic, technological, economic, and cultural changes are interacting to push patterns in diverse directions – sometimes counteracting and sometimes reinforcing each other.”

High housing costs also play a role in the growth of the “super commuter” phenomenon, the report found. As jobs continue to grow but housing supply remains constrained, those large metropolitan areas are “growing unaffordable even for many with six-figure salaries,” the firm’s researchers said. “This leads to an increase in super commuters as these workers find themselves needing to move further and further from the urban core in order to afford the type of housing they desire.”

Meanwhile, the firm’s study determined that remote work-from-home employees are typically clustered in mid-sized cities such as Raleigh, NC, Denver, and Austin, TX.

“The growth in both super commuters and remote workers has been consistent over the past 15 years,” Apartment List’s researchers noted in the report. “As both technology and local economies evolve, however, America’s workers are increasingly embracing new flexibility and separating the two decisions.”

Autonomous vehicle technology eventually promises greater commuting ease and safety, they said, which would allow workers to move even farther from their jobs.

“On the other hand, the proliferation and constant improvement of teleconferencing technologies and office communication tools make it easier each year to feel connected to a team as a remote worker,” Apartment List’s researchers added. “Barring a disruption in these trends, the future of the typical commute may be very different from its long past.”