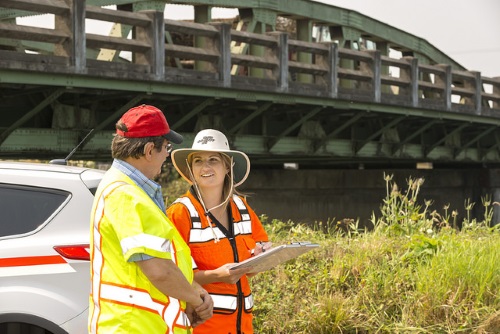 [Above photo by the Oregon Department of Transportation.]

Based on surveys of chief administrators and human resource directors in 33 states, a survey of nearly 3,000 state-government job seekers, and analyses of over 14 million public sector job postings, NASCA’s research — compiled in a report titled Job One: Reimagine Today’s State Government Workforce — indicates that there is a “widening gap” between the number of open jobs and the number of applicants.

According to the report, chief administrators and HR directors find “difficulty attracting new employees” as the top workforce management challenge. When respondents were asked which trends have the greatest impact on their workforce strategy, nearly two-thirds (64 percent) of state administrators cited a “growing skills gap,” indicating that recruiting the best talent, with the right skills, is a top issue for these leaders in state governments.

NASCA’s research also identified several factors helping to widen the gap between the number of state job openings and applicants for those positions. They include: changes in workforce expectations, especially the reduced appeal of “lifetime employment” among younger generations; less-competitive salaries; rising competition from the private sector; and negative perceptions about working for government.

Recommendations tied to the report’s findings call for more “vigorous and focused” action by states to start closing the talent/skills gap. Among the key steps the report includes as part of its ‘roadmap for change’ are:

“There has never been a more critical time to be hyper-focused on the recruitment and succession of state employees,” said Shane Evangelist, CEO of NEOGOV, in a statement. “Over the last five years, the number of applicants per job opening has dropped 30 percent, requiring state leaders to focus on making their jobs more attractive, broadening their hiring search, and developing their existing employees for succession.”

State department of transportation executives noted in recent meetings that just getting more public attention to such workforce issues is a critical first step on the road to finding solutions to them.

“One of things we are doing is sounding the alarm; just broadcasting the facts about our workforce situation,” noted Roger Millar, secretary of the Washington State Department of Transportation, during a panel discussion Jan. 15 at the 2019 Transportation Research Board’s annual meeting in Washington, D.C.

Yet while pay is important, Millar said for WSDOT to become and remain an “employer of choice” will take more than just money: “We need to commit to our workforce so they will commit to us. If you want respect and loyalty [as a state DOT] you need to show it,” he stressed.

For example, Millar said two-thirds of WSDOT’s employees are on “flexible work schedules” that are not traditional “nine-to-five” shift, with another 15 percent telecommuting. The agency is also pilot testing in-house daycare in order to retain new parents. “Daycare is expensive and by doing this we’re building loyalty with those parents; they end up sticking around for a while,” he noted.

Workforce development is one of three key emphasis areas for Carlos Braceras, executive director of the Utah Department of Transportation and the 2018-2019 president of the American Association of State Highway and Transportation Officials.

“State DOTs are facing new challenges on several fronts,” he explained. “As technology develops rapidly, we as owners need to adapt proactively to operate safer, more effective transportation systems. Attracting and keeping a highly-skilled workforce is critical. It’s also imperative that we find ways to educate lawmakers and members of the general public about the irrefutable connection between long-term investment and safer, smarter, and more reliable transportation systems.”

In terms of workforce development, Braceras said the current robust economy and low unemployment rate are making it difficult for state agencies to compete with the private sector for engineers, technicians, and information technology professionals. “State DOTs must attract and keep these workers to build, maintain and manage America’s increasingly sophisticated transportation networks,” he stressed.

President Plans to Nominate Homendy to be NTSB Chair