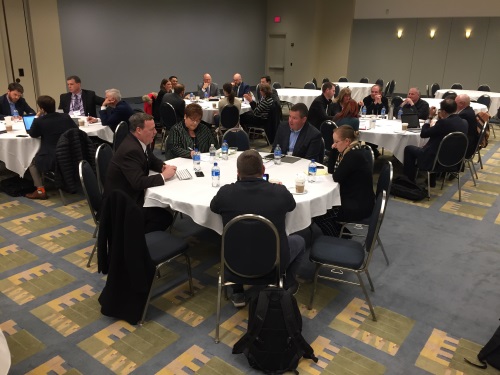 “How autonomous vehicles are changing the nature of motor vehicles and how public policy must adapt to those new technologies are issues we will be dealing with now and in the future,” he explained. “As a result we need to explore what opportunities may exist for cross-sector [policy] collaboration across jurisdictions.”

Over 40 representatives from local, state, and federal government agencies, along with industry associations and private companies, attended the roundtable and provided their insights on how to build a broad “regulatory framework” in the U.S. to support autonomous vehicle innovation while ensuring safe testing and deployment practices.

“There is a legitimate debate between the need for introducing new technology balanced against the need to test and regulate this technology,” noted King Gee, AASHTO’s engineering director. “Safe deployment of autonomous vehicles is what we all want.”

Bernard Soriano, deputy director of the California Department of Motor Vehicles, noted for example that his state has had regulations in place for autonomous vehicle testing on public roads since 2014.

Since that time, he said his agency has issued 66 permits to 62 companies actively testing autonomous vehicle technology: from manufacturers and Tier 1 suppliers down to “small startup companies” making components that eventually will be incorporated into autonomous vehicle systems.

Soriano – who serves as the chair for AAMVA’s autonomous vehicle work group – also pointed out that there have been 134 crashes involving autonomous test vehicles over the nearly five-year span since California DMV has been issuing testing permits, “most of them minor, with them typically getting hit from behind by conventionally-driven vehicles,” he said.

“As a result of this, the issue we need to take on is the public education need around this technology and, more importantly, explaining the limitations of this technology,” he stressed. “We [AAMVA] published a set of best practices in May of 2018 to guide states in administering the operation of autonomous vehicles and are now working on a second set.”

Yet Jeff Beck, manager of federal affairs for the Alliance of Automobile Manufacturers, emphasized that regulation is something of a double-edged sword when it comes to the development needs of autonomous vehicle technology.

“Automakers need clarity more than anything else when it comes to the regulations governing autonomous vehicle technology, and more importantly, to get those rules right,” he said. “But it typically takes eight to 10 years to complete rulemaking at the federal level – and that means, in the interim, the U.S. could lose its lead in innovation.”

“While track testing is valuable, there are many limitations from close course operation and computer simulations. We cannot replicate the incredibly diverse set of conditions on rural and urban roadways, with fast, slow, and distracted human drivers,” he said. “The only way machine learning can understand that complexity is to operate on real roads. Also, without the data gathered from real-world testing, the rulemaking process can become more difficult.”