AASHTO Appoints Ajegba as Chair of the CRUO Committee 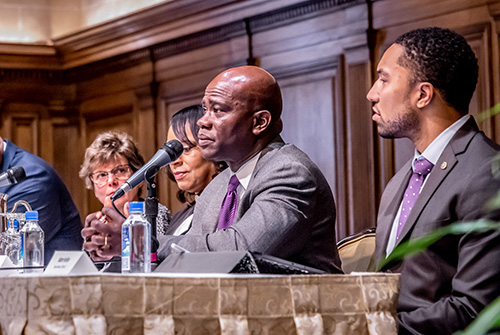 The American Association of State Highway and Transportation Officials has appointed Paul Ajegba, director of the Michigan Department of Transportation, to a two-year term as chair of the Committee on Right of Way, Utilities, and Outdoor Advertising Control, known as CRUO.

[Above photo by Michigan DOT.]

This committee is tasked with reviewing and recommends changes to laws, rules, regulations, and procedures affecting right of way, utility, and outdoor advertising issues, as well as maintaining three AASHTO publications on those subjects.

Ajegba is 28-year veteran employee of the Michigan DOT who became its director this January. He previously served for three months as Metro Region engineer and before that for seven years as University Region engineer.

During his stint in the University Region, Ajegba and his team helped guide the planning, design, and construction of several major projects, including the US-23 Flex Route project – one nominated for the 2017 America’s Transportation Award competition.