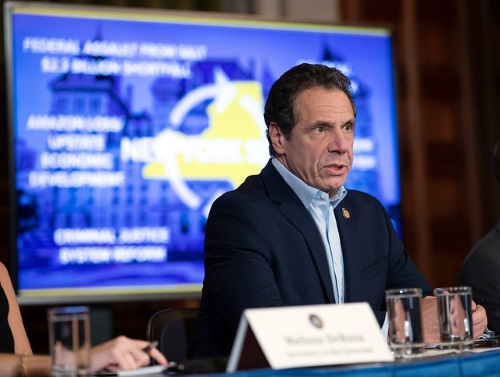 [Above photo by Mike Groll/Office of the NY Governor.]

“From the beginning, I said we will not do a budget that fails to address three major issues that have evaded this state for decades – the permanent property tax cap, criminal justice reform, and an MTA overhaul including central business district tolling,” Gov. Cuomo said in a statement. “This agreement accomplishes [those] goals.”

“This budget delivers on our promise to develop sustainable funding for the MTA and addresses critical transportation needs throughout the state,” added New York State Assembly Speaker Carl Heastie, a democrat who represents the state’s 83rd district.

The central business district tolling program – touted as the “first program of its kind in the nation” – will install electronic tolling devices on the perimeter of New York City’s central business district, defined as streets south of 60th street in Manhattan. The program – which aims to begin operation by December 31, 2020 – will be operated, and maintained by the Triborough Bridge and Tunnel Authority in partnership with the New York City Department of Transportation, with a TBTA charged with establishing a six-member “Traffic Mobility Review Board” to guide the creation and implementation of on tolls, exemptions, and credits.

According to the FY 2020 budget, those central business district tolls will be variable and passenger vehicles will only be charged once per day, with monies collected placed in a “dedicated lockbox” to ensure that 100 percent of that revenue only funds MTA capital needs

To raise additional funds for the MTA, New York’s FY 2020 budget implements a “progressive mansion tax” on mansions with a combined top rate of 4.15 percent on the sale of properties valued at $25 million or above. That tax – which goes into effect July 1 – is expected to raise $365 million that will be deposited into the MTA’s capital lockbox and will be used to support up to $5 billion in financing for MTA projects.

The FY 2020 budget also creates a “consistent framework” for the collection of required sales taxes by internet marketplace providers; a move expected to generate $160 million annually in new revenue for local governments and $320 million for the MTA capital plan lockbox.