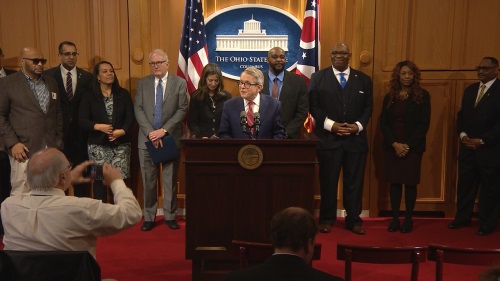 Ohio is the latest state to successfully raise its fuel tax, though the amount of the increase is lower than the 18-cent boost initially requested by Gov. Mike DeWine (R) in February.

[Above photo by the Ohio Governor’s Office.]

Following committee hearings and negotiations, Ohio legislators agreed to increase the state tax on gasoline by 10.5 cents per gallon and by 19 cents per gallon for diesel that Gov. DeWine signed into law.

As a result, Ohio’s gasoline and diesel tax will rise to 38.5 cents and 47 cents per gallon, respectively, according to news reports.

Those increases should add an extra $865 million in additional yearly funding for roads and bridges.

Ohio is one of four states that successfully boosted transportation funding in the first quarter this year.

Alabama and Arkansas, for example, raised their respective fuel taxes and added other transportation-related fees in March.

In Alabama’s case, the legislature passed a 10 cents-per-gallon fuel tax increase, indexed to the National Highway Construction Cost, and tacked on new annual registration fees of $200 for electric motor vehicles and $100 for hybrid motor vehicles.

In Arkansas, the legislature signed off on a 3-cent-per-gallon hike in the state’s gasoline tax, a 6-cents-per-gallon boost to the state’s tax on diesel tax fuel, and tacked on an additional levy based on the average wholesale price of fuel.

Altogether, according to the Transportation Investment Advocacy Center, 43 states introduced 231 transportation funding bills in just the first quarter of this year alone, including the now-successful efforts by Ohio, Alabama, and Arkansas. Utah also began charging owners of all-electrics and hybrid electric vehicles a higher registration fee this year as part of transportation legislation passed in 2018.

That’s fueling the desire by many groups to see a similar effort develop at the federal level.

The American Trucking Associations is one trade group that recently renewed its call to increase federal fuel taxes as part of national infrastructure public relations campaign it launched on April 3, with ATA President and CEO Chris Spear advocating for proposed 5 cent-per-gallon user fee added on to all transportation fuels – including gasoline, diesel, and natural gas – each year over the next four years, resulting in a 20-cent-per-gallon tax boost.

“The fee will be applied at the wholesale terminal rack, before the retail gas pump, and indexed to inflation and improvements in fuel efficiency,” he said in a blog post. “The business community, including the trucking industry, will shoulder a large share of the $340 billion that the plan would generate.”

Similar ideas were touted by Congressional representatives and industry stakeholders during a House of Representatives Ways and Means Committee hearing on March 8.

Thomas Donohue, president and CEO of the U.S. Chamber of Commerce, emphasized increasing the federal fuel tax is necessary to pay for growing infrastructure needs – reiterating his organization’s call for a 25-cent-per-gallon increase in the federal tax on diesel and gasoline to be phased in over five years, indexed to inflation and adjusted for future increases in vehicle fuel economy, at the hearing

“[This] user fee was last raised in 1993. Since then, inflation has eroded over 40 percent of the value of the fee,” he explained in his testimony. “In addition, vehicles are significantly more fuel-efficient than they were 25 years ago. As a result, motorists use less fuel to drive the same number of miles, and there is significantly less revenue to maintain the roads upon which they drive.”

Donohue noted that additional 25-cents-per-gallon would raise $394 billion over the next 10 years, which would then be invested in highways, bridges, and transit systems.

Carlos Braceras, executive director of the Utah Department of Transportation and president of the American Association of State Highway and Transportation Officials, made a similar point about the need for more infrastructure funding during an informational hearing before the Senate Committee on Environment and Public Works late last year,

“Just to keep our current FAST [Fixing American’s Surface Transportation] Act funding levels, Congress has to find $90 billion in additional revenues for a five-year bill or $114 billion for a six-year bill,” Braceras noted in his written remarks. “At the same time, the purchasing power of [highway] trust fund revenues has declined substantially due to the flat, per-gallon motor fuel taxes that have not been adjusted since 1993, losing half of its value over the last quarter century.”

He said that ultimately means federal highway programs are expected to experience a 51 percent drop after the FAST Act expires in 2020, while federal transit programs would have to be “zeroed out” in 2021 and 2022.