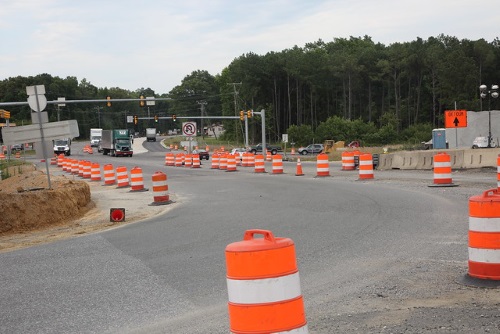 The House of Representatives’ Transportation & Infrastructure Subcommittee on Highways and Transit delved into ways to improve roadway safety during a hearing on April 9 and roadway design changes were targeted by members of Congress as well as witnesses as one of several ways to achieve that goal. Yet the need to increase transportation funding loomed over that discussion.

“We need to look at safety from all angles – not just promoting more responsible behavior by road users, but by ensuring that roadway design takes into account all users through smart policies, such as complete streets,” noted Rep. Peter DeFazio, D-Ore., chair of the House T&I Committee, in his written remarks.

“Addressing the unique elements of each community, such as pedestrian accessibility, street crossings, and bus and bike lanes, rather than a cookie-cutter approach can have a profound impact on reducing traffic accidents and fatalities,” he added.

But Rep. DeFazio also stressed that “while we invest billions of dollars in research for cancer and other diseases and allocate new resources to combatting the opioid crisis, we have failed to seriously invest in lowering deaths on our nation’s roadways.”

“I am anxious to learn from today’s witnesses … what we can do about reducing roadway fatalities,” said Rep. Eleanor Holmes Norton, D, the at-large-representative for Washington D.C. and chair of the highways and transit subcommittee.

Rep. Ross Spano, R-Fla., provided additional opening remarks, noting in his written testimony that many of those “proven strategies” are safety programs administered by the Federal Highway Administration and the National Highway Traffic Safety Administration.

“These programs require states to have a data-driven, performance-based approach to address their unique highway safety challenges,” he said. “The FAST Act expires on September 30, 2020, and as we continue with our re-authorization process, it is important that we gather feedback on how well these programs are working and what other policy and programmatic changes the committee should consider.”

Jennifer Homendy, a member of the National Transportation Safety Board, noted in her written remarks that changing the speed limit guidance within the Manual of Uniform Traffic Control Devices or MUTCD is one potential performance-based safety tactic.

“Speed limits are a critical component of speed management [and the MUTCD] emphasizes that states and localities set speed limits within 5 miles per hour of which 85 percent of vehicles are traveling,” she explained. “The focus on the 85th percentile has led to increasing speed limits across the United States. For example, in 2012, 35 states had maximum speed limits at or above 70 mph; that increased to 41 states by 2016, with 7 of those states at or above 80 mph.”

She said the NTSB recommends de-emphasizing the 85th percentile approach and instead require consideration of factors which are currently only optional, such as crash history, roadway characteristics, and roadway conditions. The agency also recommends incorporating a “safe systems approach” for urban roads by evaluating pedestrian and bicycle traffic alongside motor vehicle needs.

In written testimony submitted for the hearing record, the American Association of State Highway and Transportation Officials emphasized that the design guides they produce provide planners, engineers, and designers with significant flexibility in how they ultimately design a transportation project while taking into account the overall safety and operations of the facility.

Further, AASHTO stated in its remarks that those guides “do not establish mandatory requirements for how a project should be designed; rather, they emphasize flexibility and encourage planners, engineers, and designers to take into account the unique aspects of each individual project.”

However, ATSSA’s Bruemmer stressed in his remarks that “none of these safety priorities can be achieved without a solvent, robustly funded Highway Trust Fund.”

AASHTO agreed with that position, emphasizing in its written testimony that “an important aspect to programming funding is flexibility both in how funds can be used among engineering, education, enforcement and emergency services efforts as well as within the engineering domain where state DOTs have the most control to identify which engineering solution may be most appropriate to improve safety.”

ATSSA’s Bruemmer further added during the hearing that continuing to spend more from the Highway Trust Fund than is collected through taxes and fees “is not a long-term solution. We need to address these deficiencies. In that regard, we strongly support an increase to user fees to address the long-term viability of the Highway Trust Fund, which include increasing and indexing the motor fuels user fees, an eventual move towards a vehicle miles traveled user fee system, and where it makes sense, the use of public private partnerships.”