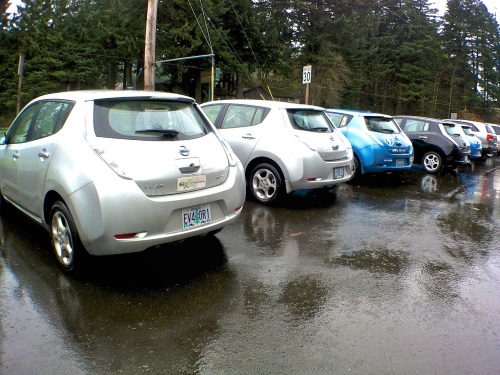 Four U.S. Senators and one member of the House of Representatives proposed legislation on April 10 that would maintain and also extend tax credits for consumers purchasing an eligible electric or hydrogen-powered fuel cell vehicle.

[Above photo by the Oregon Department of Transportation.]

That bill would raise the vehicle cap by allowing purchasers of an additional 400,000 vehicles per manufacturer to be eligible for a new $7,000 tax credit, while maintaining the $7,500 tax credit for the first 200,000 units sold.

Consumers can receive the full value of a $7,000 credit through the calendar quarter after the 600,000th vehicle is sold, according to the legislation, with the value of the credit to consumers then decreasing to 50 percent before being phased out entirely after six months. The bill also extends the hydrogen fuel cell credit for 10 years, through 2028.

The “Driving America Forward Act” stands in contrast to legislation re-introduced by Sen. John Barrasso, R-Wyo., and Rep. Jason Smith, R-Mo., on Feb. 6 that Sen. Barrasso initially proffered last October in the waning days of the 115th Congress; legislation dubbed the “Fairness for Every Driver Act” that seeks to end electric vehicle federal tax credits while imposing a fee on operators of all alternatively fueled vehicles – be they powered by electricity, natural gas, hydrogen, etc. – that will be collected over the next 10 years and paid into the Highway Trust Fund.

“This legislation levels the playing field for all cars across America,” he added. “Gas, electric, and alternative fuel vehicles all use the same roads and put the same amount of wear and tear on those roads. Every driver should contribute to maintain America’s highways.”