AAA Report: Night Driving Could Be Safer with ADB Headlights 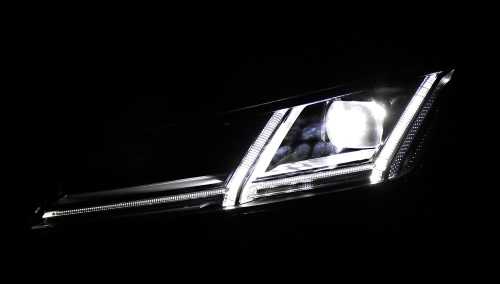 A new study by AAA indicates night driving – the highest fatality rate time slot for both drivers and pedestrians – could be made safer if adaptive driving beam or ADB headlights were allowed to be installed on vehicles in the U.S.

[Above photo by Audi.]

With ADB technology, a vehicle’s high beams are “always on” and automatically “shade” themselves when another vehicle is detected to prevent glare that would otherwise interfere with the other driver’s field of vision.

AAA noted in a statement on April 16 that ADB headlight technology is “not presently allowed by U.S. [vehicle] standards” and it is supporting a rulemaking effort initiated by the National Highway Traffic Safety Administration last October to change those standards

“We support adaptive driving beam headlights and NHTSA’s work in this area to consider changing the current standards,” said Jill Ingrassia, AAA’s managing director of government relations and traffic safety advocacy. “Allowing ADB will not only improve roadway visibility but the safety of every driver and pedestrian who must travel at night.”

ADB headlamps are already being used in Europe and Canada, AAA noted, and the group’s research found that European vehicles equipped with ADBs increase roadway lighting by as much as 86 percent when compared to U.S. low beam headlights.

AAA research conducted three years ago found that 64 percent of American motorists say they do not regularly use their high beams. That means when driving at moderate speeds like 40 mph with low beams on, motorists will not have enough time to appropriately react to something or someone in the roadway, the group stressed.

High beams, however, improve forward illumination by 28 percent in comparison and are much more effective at providing the proper amount of light when traveling at higher speeds, AAA said, and

AAA also noted in an 84-page report released last December that “deteriorating” headlamp covers also impact roadway lighting capability and pose a “safety hazard.” That report noted that headlamp lenses made of polycarbonate, or plastic, begin to “yellow and otherwise show signs of deterioration at five years of age” on average.