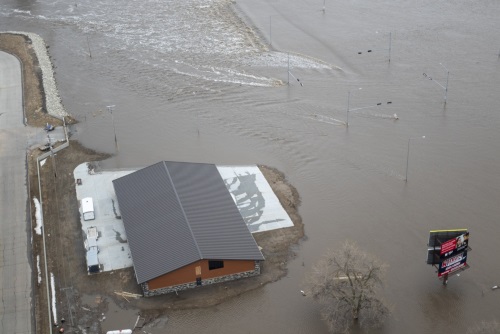 [Above photo by the Nebraska National Guard.]

FHWA said 68 counties in Iowa experienced heavy flooding, with the majority of the damage – estimated at $90 million in total – largely concentrated in the southwest portion of the state after some Missouri River levees were breached. Key federal-aid routes in the area were damaged, including I-29, I-680 and US-34, FHWA noted, with I-29 suffering an estimated $40 million in damage.

The situation faced by Nebraska DOT is even more extensive – topping $160 million – as 69 of the state’s 93 counties report substantial flood damage. State officials estimate nearly 190 highway miles need significant repair, as well as 27 state bridges with damage – including seven that will need major repair and six that must be replaced, FHWA noted.

Jeni Campana, a Nebraska DOT spokeswoman, told the Associated Press that the state has reopened all but 19 of the 2,000 miles of highway closed due to flooding. She added that Nebraska DOT is “working to absorb the cost of flood repairs” without disrupting other planned road projects.

“We’re still trying to operate with business as usual,” she said. “We’re feeling pretty confident we’re not going to see a huge impact.”