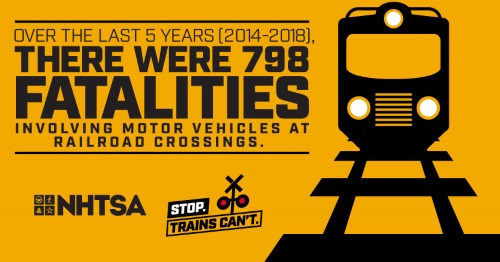 The agencies noted that in 2018 alone, 270 people were killed at railroad crossings. Of those, 99 died after the driver went around lowered crossing gate arms – a 10-year high.

“Rail safety isn’t just about the safe movement of passenger and freight trains; it’s also about helping the American public be safe near railroad tracks,” said FRA Administrator Ronald Batory in a statement.

Given their size and weight, neither freight nor passenger trains can stop easily to avoid cars or other vehicles on the tracks, he added, pointing out that trains cannot swerve out of the way and that a freight train traveling 55 mph can take more than a mile to stop, even when emergency brakes are applied.

NHTSA noted that every four hours in America, a person or vehicle is struck by a train at a rail crossing, and that over the past five years, 798 people have died while trying to drive across railroad tracks.

The renewed safety campaign – called “Stop. Trains Can’t.” – aims to remind motorists about the potential risks of an approaching train when crossing railroad tracks, especially when active warning devices such as flashing lights or gate arms are descending or lowered.

The campaign’s targeted advertising will run from Tuesday, April 16 through Sunday, May 12.  It includes video spots that will run on digital and social platforms, radio advertising, and social media messaging, including Facebook, Twitter, and Instagram.