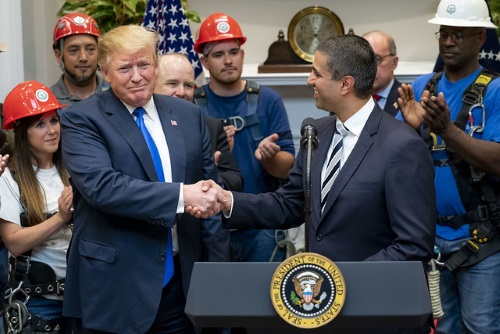 In a White House press briefing on April 12, President Trump committed his administration to “freeing up as much wireless spectrum as needed” to speed up the build out 5G wireless networks; a move that could open the 5.9 GHz transmission band, currently reserved for transportation communication needs, for other commercial uses.

“Secure 5G networks will absolutely be a vital link to America’s prosperity and national security in the 21st century,” the president said. “5G will be as much as 100 times faster than the current 4G cellular networks. It will transform the way our citizens work, learn, communicate, and travel. It will make American farms more productive, American manufacturing more competitive, and American healthcare better and more accessible. Basically, it covers almost everything, when you get right down to it.”

State departments of transportation are concerned, however, that future spectrum auctions could include the 5.9 GHz band; a move Federal Communications Corporation Commissioner Mike O’Rielly publicly supported in comments he made last year.

“The reality is that the entire debate has gravitated away from the type of sharing regime envisioned,” he said. “Instead, the commission should move past this and initiate a rulemaking to reallocate at least 45 megahertz of the band, which is completely unused today for automobile safety.”

To help speed up the deployment of 5G technology, President Trump said that the FCC is changing the physical cellular infrastructure permitting process local governments must follow.

“They must now approve new physical infrastructure within 90 days, instead of many years … and there is now a cap on the unreasonable fees local governments often charge,” he stressed. “[Those] changes will contribute greatly to building high-speed networks across America.”

The president added that, by the end of this year, the United States will have 92 5G deployments in markets nationwide.  “And we’re going to accelerate that pace greatly,” he emphasized.

FCC Chairman Ajit Pai added during the briefing that his agency is engaging in several other initiatives to spur the broader deployment of 5G networks in the U.S.:

The American Association of State Highway and Transportation Officials stated in comments filed with the U.S. Department of Transportation in late February that “future cooperative and collaborative development” especially where 5G technologies are concerned “needs to occur without disrupting investments” in current technology.

“Cooperative systems achieved through communication between vehicles, infrastructure, and other users will provide an enhanced layer of safety and must be advanced,” the organization said in its Feb. 20 comment letter. “This ability to communicate will be essential for extending the range of vehicle-based sensing and achieving the full potential of safety benefits envisioned by connected and automated vehicles or CAVs.”

AASHTO pointed out that such “collaboration” will take time, which is why “it is critical” that the current 5.9 GHz communication spectrum band “continue to be reserved for transportation safety purposes.”