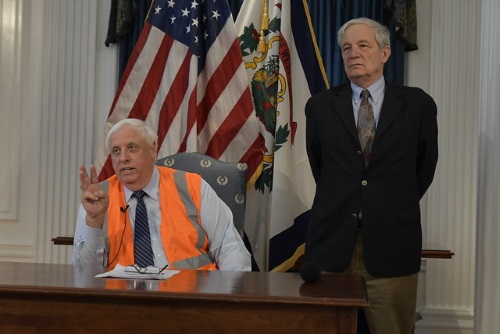 During an April 16 press conference, Governor Jim Justice (R) (seated at left) said the West Virginia Department of Transportation’s highway division has been “working like crazy” for a month to make a host of repairs to secondary roads across the Mountaineer state.

“We’ve got so much good stuff going on now it’s unbelievable,” Gov. Justice noted during the conference. “The amount of work we’ve been able to accomplish in such a short time makes me very proud.”

He added at the conference that the West Virginia DOT has gone through the original list of suggested road maintenance projects – turned in by district managers and county supervisors back in March – and have now reorganized it into a new, prioritized list of projects that they intend to complete as soon as possible.

“Now we’re really moving and we’re just going to start moving even faster as the weather gets better,” Gov. Justice stressed. “At the end of the day – I keep saying it – we’re going to fix the damn roads, that’s all there is to it.”