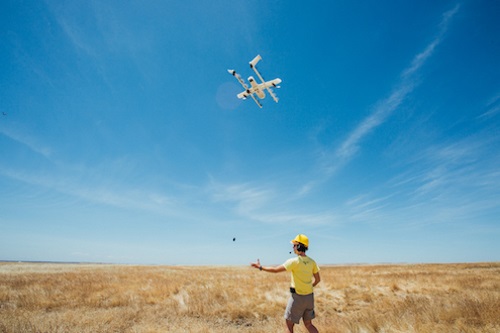 The Federal Aviation Administration awarded its first air carrier certification for commercial drone operation to Project Wing, a division of Alphabet, on April 23. The company will start making food deliveries in Blacksburg, VA – home to the Virginia Polytechnic Institute & State University, which along with the Mid-Atlantic Aviation Partnership, participated with Wing in the U.S. Department of Transportation’s Unmanned Aircraft Systems Integration Pilot Program launched last May.

[Above photo by Project Wing.]

The FAA said in a statement that Wing demonstrated that its operations met the agency’s “rigorous safety requirements” to qualify for an air carrier certificate.

“This is based on extensive data and documentation, as well as thousands of safe flights conducted in Australia over the past several years,” the FAA said.

Another drone pilot program aiming to gain certification for commercial operation is a medical sample delivery system being operated by United Parcel Service in and around Raleigh, N.C. The FAA and the North Carolina Department of Transportation are providing oversight of that new service, which began operation in late March.

The FAA is also crafting new regulations to pave the way for more commercial drone activity.

The first is an interim final rule regarding drone identification markings that became effective Feb. 25 and creates both a web-based aircraft registration process specifically for drones while requiring that registration number to be marked on the exterior of the aircraft.

The other two are notices of proposed rulemaking, with one focused on rules for drone overflights of people while the other – officially an advanced notice of proposed rulemaking – seeking industry input on how to reduce risks to public safety and national security as drones are integrated into the national airspace system.