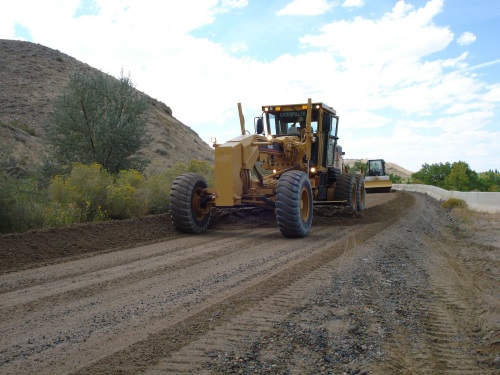 [Above photo by the Navajo Department of Transportation.]

Based on interviews with officials from 57 tribes and 21 federal agencies, as well as comments submitted by 100 tribes in 2016 on tribal consultation for infrastructure projects, the main “collaborative” problems illustrated by the GAO report include:

Federal transportation agencies in particular are working to overcome those issues. In October 2018, the Federal Highway Administration published a 22-page Notice of Funding Opportunity in the Federal Register to make $300 million available through its Nationally Significant Federal Lands and Tribal Projects or NSFLTP program – with this funding being made available “for the first time” to build and repair roads and bridges that serve tribal or federal lands.

The program prioritizes highways and bridges that access our national treasures and improve the quality of life throughout Indian country,” noted FHWA Deputy Administrator Brandye Hendrickson. “The funds will go a long way in making sure that needed improvements to infrastructure serving federal and tribal lands are addressed.”

Meanwhile, state departments of transportation have been working on their own to improve collaborative interactions with tribal governments.

The Arizona Department of Transportation is hosting a series of forums this year in partnership with the Inter Tribal Council of Arizona to connect agency personnel with transportation officials and other representatives from tribes on matters ranging from enforcement of weight restrictions on state highways to sharing information from industry conferences.

During a panel discussion held January 16 held during the 2019 Transportation Research Board’s annual meeting in Washington, D.C., managers from the Oklahoma Department of Transportation and Alaska Department of Transportation & Public Facilities discussed how they are forging closer ties with tribal governments, especially since tribal communities tend to have a number of members who don’t own cars, so they have more pedestrian and transit needs, explained Rhonda Fair, director of tribal coordination for the Oklahoma DOT.

“Oklahoma has 38 federally recognized tribes [and] over the years they have contributed $192 million to transportation projects; a number I believe is underreported,” Oklahoma DOT’s Fair said, adding that her agency consulted with the various tribal governments within her state on 109 transportation projects in 2018 alone.