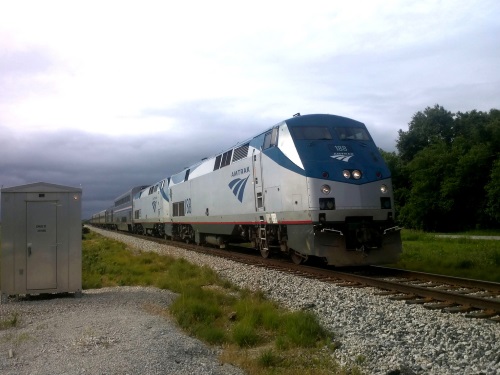 Ratified by the state legislature and signed into law by Gov. Eric Holcomb (R) on April 23, Indiana’s two-year $34 billion budget eliminates a $3 million annual subsidy for the Hoosier State Train (seen above), which is operated by Amtrak and runs from Indianapolis to Chicago. Amtrak said that, without state funding, Hoosier State train service will end June 30 – the day upon which that state subsidy expires.

According to news reports, much of that $3 million subsidy flows from the Indiana Department of Transportation’s budget, with another $500,000 or so from Lafayette, West Lafayette, Tippecanoe County, Crawfordsville and Rensselaer. But state officials said ridership is not high enough nor growing quickly enough to justify continuation of that subsidy.

Analysis by the Midwest Interstate Passenger Rail Commission backed up that assessment. In a statement issued last December, while both ridership and ticket revenue on state-supported passenger trains in the Midwest enjoyed “robust growth” overall between 2008 and 2018 – climbing seven percent and 33 percent, respectively – Hoosier State train ridership dropped 12 percent over that decade.

Jim Stark, director of the Indiana DOT’s multimodal division, said at the time that the Hoosier State “suffered historically” from a lack of “active marketing” and from its origin as a way to shuttle train cars to and from Amtrak’s shop at Beech Grove, Indiana – adding that it only became a truly state-supported route in 2014.

According to the States for Passenger Rail Coalition, state-supported corridors supply about 48.9 percent of all Amtrak’s ridership.

Amtrak said in a statement that is its planning alternatives to Hoosier train service should it be discontinued on July 1.