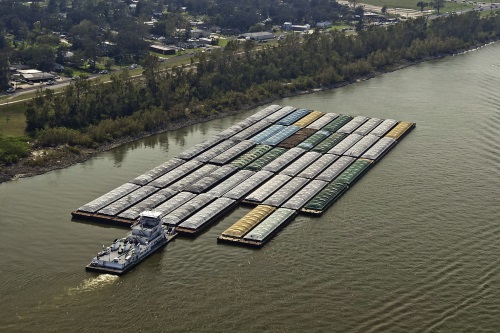 The U.S. Maritime Administration is providing $6.79 million worth of grants to marine highway projects in New York, Louisiana, and Virginia.

[Above photo by U.S. Department of Agriculture.]

“America’s Marine Highway Program is dedicated to expanding freight movement on the water and this round of grant funding will go a long way towards ensuring that our nation’s waterways continue to be utilized as effectively as possible,” said Rear Admiral Mark “Buz” Buzby USN (Ret.), head of MARAD, in a statement on April 18.

MARAD’s Marine Highway Program works with both public and private stakeholders to increase the use of domestic navigable waterways to haul freight as a way to relieve “landside traffic congestion,” provide new and efficient transportation options, and increase the productivity of the surface transportation system.

Buzby noted in remarks given at the American Association of State Highway and Transportation Officials 2019 Washington Briefing in February that rising freight demand has the “real ability” to create “significant bottlenecks,” tying up the nation’s road and rail system. By extension, that means other surface transportation avenues for cargo should be “encouraged.”

“We can relieve stress on highways and railways by using the ‘blue highway’ inland waterway system,” he pointed out.

The three marine highway projects receiving the $6.79 million in MARAD grant money are: