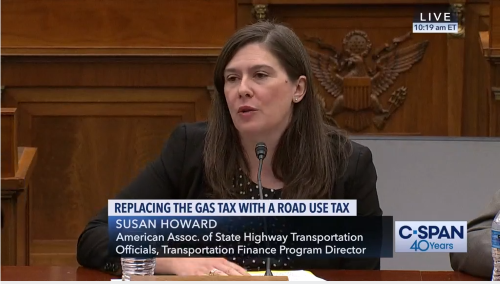 A panel discussion hosted by the Information Technology and Innovation Foundation on April 24 at the Rayburn House Office Building in Washington, D.C., examined the case for switching from motor fuel taxes to road user charges or RUCs to provide monetary support for the Highway Trust Fund.

She explained that one of the reasons many state departments of transportation are currently pilot testing RUC programs – also known as vehicle miles travelled or VMT programs – is that there is “recognition of the need to capture revenue from alternatively fueled vehicles (AFVs),” which do not pay motor fuel taxes.

“The one thing we’ve heard from state DOTs is that they’re mindful that upping the number of AFVs on the road will impact [fuel tax] revenues – and a RUC or VMT program seems the best way to address that issue most effectively,” Howard noted.

ITIF’s Robert Atkinson added that another reason RUCs are “gaining ground” is that “it appears really for the first time since we’ve looked at this issue that there is very serious interest from Congress. That’s fantastic; that’s really new.”

He noted that his organization published a detailed report on RUC programs – dubbed A Policymaker’s Guide to Road User Charges –on April 22 to convince Congress to pass legislation directing the U.S. Department of Transportation to take the lead in establishing a national RUC system based on Global Positioning System data taken from both passenger vehicles and commercial trucks. ITIF noted in its report that a three- to five-year “transition period” will be necessary to provide time for the USDOT to develop a national RUC payment system.

“Road user charges are the most viable and sustainable long-term ‘user pay’ option for the federal government to both raise adequate and appropriate revenues and provide the federal share of funding for the nation’s surface transportation system,” ITIF argued in its report.

One example of that “serious interest” comes from remarks made by Rep. Peter DeFazio, D-Ore., chairman of the House Transportation and Infrastructure Committee, and Ranking Member Rep. Sam Graves, R-Mo., at the AASHTO 2019 Washington Briefing in February.

Rep. DeFazio noted at the briefing that as his committee draws up an infrastructure bill, he plans for it to have a national VMT pilot program included within it. “This is something Sam [Rep. Graves] and I agree on,” Rep. DeFazio said. “It will be easier to do that for commercial vehicles, maybe move to a weight/mile tax. I think there is some promise there.”

Marc Scribner, a senior fellow with the Competitive Enterprise Institute, also vouched for switching to a VMT program in testimony before the House Ways and Means Committee in early March.

“Fuel consumption is becoming an increasingly poor proxy for highway use,” he said. “Looking toward the long-run where motor fuel tax increases would be both ineffective in raising revenue and highly regressive, a number of states in recent years have been piloting new mileage-based revenue collection technologies and practices, which are variously known as mileage-based user fees, road usage charges, and VMT taxes. All refer to the same approach where users are directly charged based on the distances – and perhaps weight of the vehicle – they drive, which is as close to optimal road charging that current technology permits.”

Yet there are several issues switching over to an RUC programs would entail, emphasized AASHTO’s Howard during the April 24 panel discussion.

“There are privacy and data concerns: not so much about the issue of ‘tracking where I travel’ but more so around the security of the data as we have seen multiple [data system] breaches lately,” she emphasized. “It is important to look at how [RUC] data will be collected and handled.”

Another concern is the administrative costs of an RUC system. “The cost of collecting the fuel tax is minimal, but that will go up significantly with an RUC program,” Howard pointed out. “It costs roughly 2 percent of revenue to collect the fuel tax; that goes up to 18 percent in some cases with an RUC program.”

Yet ITIF argued in its report that “an RUC system has the capacity not only to raise needed revenues but also to provide additional benefits, including more efficient use of transportation infrastructure, reduced environmental and social externalities, and ancillary benefits to users in the form of information for drivers.”