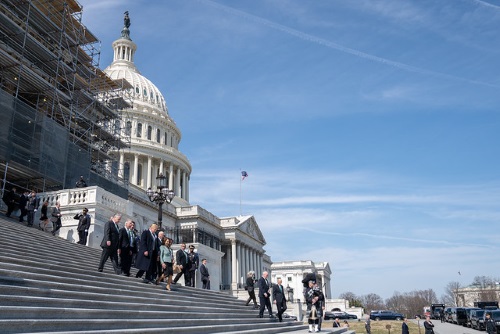 House Speaker Nancy Pelosi, D-Calif., announced plans to meet with President Donald Trump next week to discuss infrastructure legislation, as state departments of transportation continue to refine their policy focus on what should be encompassed in the next surface transportation legislation and how to pay for it.

“We’ll be meeting with the President next week … to talk about what the prospect is for the size in terms of resources and scope of what that might be,” Rep. Pelosi remarked at the Time 100 Summit in New York City on April 23, adding that she is “optimistic” about passing an infrastructure package as it “has never really been partisan.”

Meanwhile, state DOT executives are planning to gather May 20-23 at the American Association of State Highway and Transportation Officials spring meeting in Park City, Utah and discussion of infrastructure policy will be part of their agenda.

Patrick McKenna, director of the Missouri Department of Transportation and AASHTO’s 2018-2019 vice president, highlighted some of those infrastructure issues during a Senate Committee on Environment and Public Works hearing on March 6.

“We spent the past century building our nation’s transportation infrastructure. Once a model of innovation and progress, our current transportation system is in dire need of investment,” McKenna emphasized in both his written remarks and oral comments at that hearing.

“Under the direction of AASHTO’s Transportation Policy Forum that I chair, state DOTs last year initiated an extensive 18-month effort to develop and adopt reauthorization policy recommendations by October of this year,” he said. “It is a bottom-up process, where we are currently in the process of gathering expert input from our wide range of technical committees and councils comprising leaders from all state DOTs. We’re also seeking our industry partners’ input during this process prior to our formal adoption in October in order to maximize the inclusivity of perspectives in our policy recommendations to come.”

To attain that end, AASHTO’s strategic policy goals for 2019 when it comes to infrastructure funding include:

McKenna added that federal funds should continue to be provided through the existing formula-based program structure directly to states rather than looking at untested new approaches that will require more time and oversight.

“For over one hundred years, we as a nation have enjoyed the fruits of the federal government’s highly successful partnership with state DOTs to build and maintain our surface transportation system,” he said. “that partnership should be continued and strengthened in any new federal transportation legislation.”