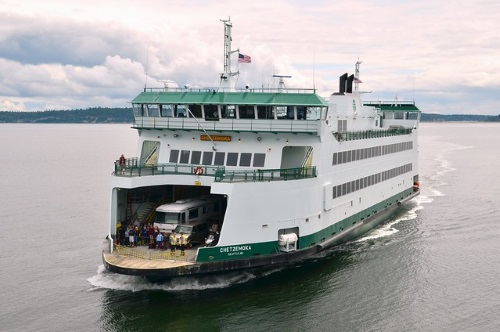 The Washington State legislature approved a two-year state operating, capital, and transportation budgets on April 30; budgets that include funds for a new hybrid-electric ferry as well as monies to convert two existing vessels to hybrid-electric propulsion.

[Above photo by the Washington State Department of Transportation.]

According to a budget overview issued by Governor Jay Inslee’s office, the cost of a new hybrid-electric ferry should total roughly $157 million, while converting the two existing diesel-powered ferries to hybrid-electric power will tally up to $132 million.

The conversion to hybrid-electric power is partly based on a study conducted by the Elliott Bay Design Group in early 2018 that found three ferries operated by the Washington State Department of Transportation burn approximately 4.2 million gallons of fuel per year and generate more than 26 percent of the ferry fleet’s annual GHG emissions. Overall, the study also found that the ferry fleet as a whole produces 67 percent of WSDOT’s annual GHG emissions.

“The legislature also finds that an increased reliance on greener transit options will help to further reduce harmful air pollution from exhaust emissions,” it said. “The legislature further finds that support for clean alternative fuel infrastructure can help to increase adoption of green transportation in the state.”

Several other “clean transportation” activities mandated by that bill include: