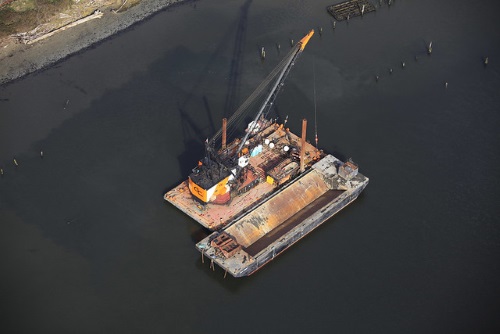 A bill proposed on April 30 hopes to free-up $9.3 billion in revenue “sitting idle” in the Harbor Maintenance Trust Fund to pay for a variety of port maintenance needs.

[Above photo by the Washington State Dept. of Transportation.]

Rep. DeFazio said in a statement that the HMTF collects more revenue from shippers than Congress has appropriated to the U.S. Army Corps of Engineers for harbor maintenance activity, claiming that approximately $9.3 billion in “already collected revenue sits idle in the U.S. Treasury, not being used for its intended purpose of investing in our nation’s ports and harbors.”

HMTF revenues come from a Harbor Maintenance Tax imposed by Congress in 1986. Directly levied on importers and domestic shippers using coastal or inland ports as a 0.125 percent ad valorem tax on the value of imported cargo, it pays for operation and maintenance dredging costs for commercial ports from maritime shippers.

According to the Congressional Budget Office, the HMTF will collect an additional $24.5 billion in new revenues including interest over the next decade, on top of the estimated $9.3 billion in previously collected but unspent revenues.

Yet, according to CBO, federal appropriations from the HMTF are only estimated to total $19.4 billion over the same decade.

Rep. DeFazio said this bill will make it easier for Congress to appropriate any funds collected in the HMTF for authorized harbor maintenance needs, including the existing $9.3 billion – enabling the expenditure of approximately $34 billion over the next decade so the ACE can dredge all federal harbors to their constructed widths and depths.

“The federal government should be using the fees it collects at our ports for their intended purpose – harbor maintenance,” he explained. “By merely spending what is already being collected we can ensure our nation’s ports and harbors remain open for business and can continue to sustain our local, regional, and national economies.”

“America’s ports and harbors are vital to the entire economy,” added Rep. Graves in a separate statement. “Farmers, manufacturers, and businesses across the country rely on ports for trade and the products we all buy at the store on a daily basis have often traveled by water at some point to get there. When any portion of our national infrastructure system doesn’t function properly that raises the costs of goods for everyone. Congress should ensure that the funds collected to improve the efficiency of our ports are invested for their intended purpose.”

Shawn Wilson, secretary of the Louisiana Department of Transportation and Development, said that state departments of transportation “have long supported full use of HMTF money to address the delayed, deferred, and desperately needed harbor infrastructure. Not addressing these needs further compromise our nation’s economic competitiveness.”

Wilson, who currently serves as the chair of the American Association of State Highway and Transportation Officials Council on Water Transportation added that the Louisiana DOTD in particular can use such funds to “address the ongoing dredging needs to maintain authorized levels of state waterways, and bring the Mississippi River to 50 feet, to remain globally competitive” in terms of hauling waterborne cargoes.

That is a point Rep. DeFazio emphasized in his remarks supporting the bill. “Ultimately it is taxpayers and consumers who pay the cost of the Harbor Maintenance Tax, as a pass through on the price of goods shipped through ports,” he emphasized.

“However, when harbors are inefficiently dredged and maintained it leads to delays and increased prices,” he said. “So, taxpayers are paying for a service that is not being done, and as a result, have to pay more for the goods they buy because of the lack of maintenance. [That’s why] it’s time Congress fully funds the operation and maintenance of our commercial harbors, including critical jetty and breakwater work.”