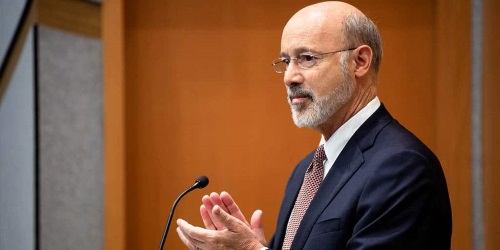 [Above photo via the Pennsylvania Governor’s Office.]

“States like Pennsylvania must take action to reduce greenhouse gas emissions and protect our communities, economies, infrastructures, and environments from the risks of a warming climate,” Gov. Wolf said in a statement. “Keeping goods and services moving across Pennsylvania’s more than 5,000 miles of freight track is vital to the state’s economy. [So] these investments in our rail infrastructure will continue to support business development and create new jobs throughout the state.”

Joining the Climate Alliance will align the Pennsylvania Climate Action Plan 2018 with similar efforts being undertaken by 24 other states, the governor’s office noted, and as the state is a “major transportation hub,” it can take steps to increase reliance on low-carbon transportation solutions while reducing emissions from its transportation fleet – part of the greenhouse gas reduction strategy mapped out in an executive order issued by Gov. Wolf back in January.

That order mandates that all state agencies collectively reduce overall energy consumption by 3 percent per year and 21 percent by 2025 from 2017 levels. It also commits to replacing 25 percent of the state passenger car fleet with battery electric and plug-in electric hybrid cars by 2025, evaluate opportunities for the reduction of vehicle miles traveled and incorporate “new transportation technology” where appropriate to reduce emissions.

That’s a further boost to joint efforts by Pennsylvania Department of Transportation and the Department of Environmental to broaden the deployment of electric vehicles, which they have been doing via the Drive Electric Pennsylvania Coalition since mid-2018.

Meanwhile, the more than $20 million in funding for 27 freight rail investments are aimed at “ensuring economic competitiveness, improving safety, and strengthening our multimodal transportation system,” noted Transportation Secretary Leslie Richards in a statement. “Advancing rail freight projects will preserve, improve, and create additional services for the industries and customers.”

“Transportation is critical to connecting communities and economies, and we are an important partner in bringing progress across the state,” added Gov. Wolf. “A government that works is one that uses every available resource for maximum impact.”