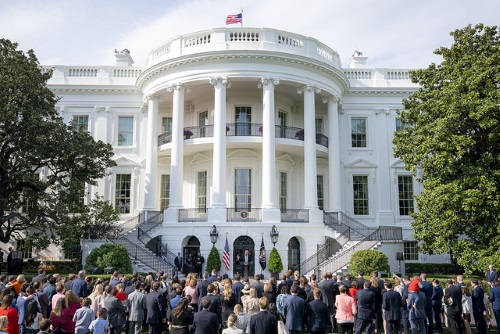 A potential $2 trillion infrastructure spending package is in the works following an April 30 meeting between President Trump and the Democratic leaders from the Senate and House of Representatives. However, the main hurdle facing such a package is how to pay for it, which will be the subject of a follow-up meeting.

“The United States has not come even close to properly investing in infrastructure for many years, foolishly prioritizing the interests of other countries over our own,” the president said in a statement following the meeting. “We have to invest in this country’s future and bring our infrastructure to a level better than it has ever been before. We will have another meeting in three weeks to discuss specific proposals and financing methods.”

“We came to this meeting with an understanding that there is great need in our country for building our infrastructure, for the recognition that we stand in a pivotal place in terms of building infrastructure for the future,” said House Speaker Rep. Nancy Pelosi, D-Calif., in comments following the discussion at the White House. “We are very excited about the conversation we had with the president to advance an agenda of that kind.”

Sen. Chuck Schumer, D-N.Y., added that “we agreed on a number, which was very, very good: $2 trillion for infrastructure. We talked about a number of things we would do. Obviously, the roads and the bridges and the highways. Obviously, water, but also a big emphasis on broadband, that every American home, we believe, needs broadband. An emphasis on the power grid so that we can bring clean energy from one end of the county to the other, and several other issues.”

He added that funding is “going to be the crucial point in my opinion. So, where does he propose that we can fund this? Because certainly in the Senate, if we don’t have him on board, it’ll be hard to get the Senate to go along. [So] we said that we would meet in three weeks and he would present to us some of his ideas on funding.”

Sen. Schumer noted that “this was a very, very good start.  And we’ll see – we hope that it will go to a constructive conclusion.”

Rep. Peter DeFazio, D-Ore., chair of the House Committee on Transportation and Infrastructure, characterized the meeting as a “step in the right direction” in a separate statement.

“Two trillion dollars is a significant federal investment that could make a real difference in communities across this country, whether we’re talking roads, bridges, and transit systems, or harbors, airports and wastewater systems, just to name a few areas that would get a real boost from a bipartisan deal,” DeFazio said. “I’m encouraged to hear the widespread agreement on the need to act on infrastructure – and to act soon.”

Rep. DeFazio added in comments made during the House T&I Committee’s Member Day hearing that his “personal speculation” is that generating funds for the proposed $2 trillion infrastructure package will focus on “bonds and user fees.”

Yet Rep. DeFazio emphasized at that hearing that he “made clear to the President that taking action to address our infrastructure needs is not optional – letting our roads, bridges, airports, transit systems, ports, and water systems crumble amounts to a national crisis. Every day that we wait to act also means the price tag to fix our infrastructure goes up,” adding that “we have let our infrastructure – and our infrastructure funding streams – stagnate to the point where we now need to invest hundreds of billions of dollars to make up for past neglect and plan for the future. There is no way around this reality if we expect improvement.”

The infrastructure agreement hammered out at the White House this week also garnered support from a variety of organizations.

“We applaud President Trump, Speaker Pelosi and Senator Schumer for recognizing the importance and urgency behind enacting common sense, bipartisan infrastructure legislation,” said Thomas Donohue, president and CEO of the U.S. Chamber of Commerce, in a statement. “This is not a partisan issue, it’s an American priority. And now is the time for action.”

Jim Tymon, executive director of the American Association of State Highway and Transportation Officials, noted in a statement that “we applaud the bipartisan acknowledgement that America’s transportation system needs additional federal investment. The people and businesses who rely on our nation’s multimodal transportation network understand that despite the best efforts of state departments of transportation and their local and regional counterparts, they cannot keep up with growing demand and a deepening backlog of maintenance.”

Dave Bauer, president and CEO of the American Road & Transportation Builders Association added that while “common ground has always been there for the taking when it comes to making major new infrastructure investments” the “foundational pillar” of any long-term infrastructure package is a sustainable, growing, user-fee based revenue stream for the Highway Trust Fund.

“It remains the linchpin for any final and meaningful deal between the Trump administration and Congress,” he said.

And the benefits from a “final and meaningful” infrastructure would be broad, argued Stephen Sandherr, CEO of the Associated General Contractors of America.

“Once enacted, these infrastructure improvements will cut commuting times, lower shipping costs, support new economic development projects and allow our businesses to remain globally competitive for years to come,” he said in a statement. “Congress and the administration need to act quickly to convert this bipartisan agreement into a comprehensive infrastructure measure that will fund significant upgrades to our aging and over-burdened infrastructure.”