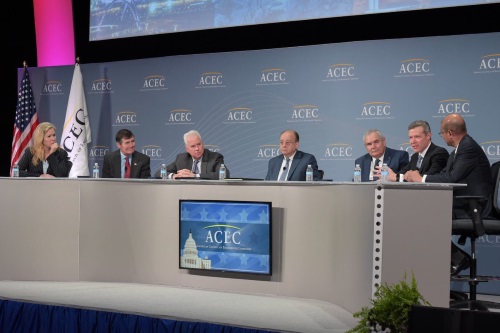 A panel discussion hosted by the American Council of Engineering Companies at its annual legislative summit in Washington, D.C., focused on several key infrastructure challenges, especially in terms of funding sources and finding enough workers to meet construction demand.

[Above photo by ACEC.]

“There is an appetite in Congress to spend money on infrastructure. It may not be the amount we need, but it will be beyond what we are spending now,” noted Jim Tymon, executive director of the American Association of State Highway and Transportation Officials. “Will it be a $2 trillion package like what Congressional leaders and President Trump discussed? I don’t know. But infrastructure is one area where we can get something done. There is a window of time here to do something.”

Most of them noted that finding enough funding for infrastructure, much less for a $2 trillion package, is a major hurdle.

“We see the gas tax as most reasonable and rational way to raise revenue for transportation; and it has not been raised [at the federal level] for 25 years,” noted Sandherr. “Many on both sides of the aisle, including the president, say raising it is something we need to do.”

Toohey added that gas taxes have been successfully increased in the past only with public support from the president. “Without presidential leadership, what is in it for a Congressman in a non-earmark environment?”

“We view infrastructure funding as joint responsibility between the federal, state, local governments,” Tymon noted. “The federal government has not increased the gas tax in 25 years, yet over 30 states have raised it within the last five years. And the politics of that are not falling along traditional partisan lines – support from state legislators on both sides of the aisle for it [gas tax increases] hasn’t cost them their seats. Hopefully, legislators at the federal level will see that and take encouragement from it.”

“The economy is great and unemployment rates are low –  but the bad news about that is it makes it harder to attract and retain workers,” Tymon explained. “Not just at the engineering level; this includes the construction, equipment operator, and maintenance levels. States are having to be more innovative – whether going out and partnering with community colleges or creating more flexibility in the workplace. They have to think outside the box now to attract and retain a workforce to get the job done.”

Sandherr agreed with that assessment. “Our biggest challenge is finding workers – we’re turning down work,” he explained. “Wages in the construction trade are 15 percent higher than the average trade – and these are jobs not likely to go overseas. You can be a welder for $90,000 to $100,000 a year in your 20s; that’s a great story we need to tell.”