Dominguez Nominated to be NYSDOT Commissioner 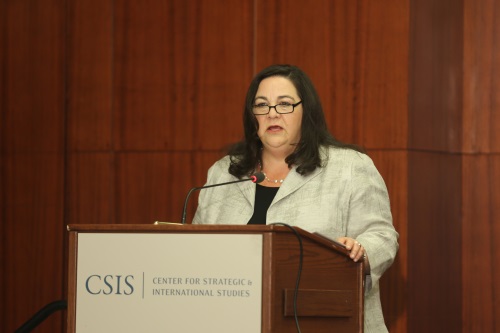 Gov. Andrew Cuomo (D) nominated Marie Therese Dominguez on May 6 to be commissioner of the New York State Department of Transportation.

Dominguez – a 20-year veteran of the transportation industry, with experience in water and energy infrastructure, safety, and logistics – most recently served as administrator of the Pipeline and Hazardous Materials Safety Administration during the second-term of President Obama’s administration.

[Above photo via the Center for Strategic and International Studies.]

At PHMSA, Dominguez managed the development and enforcement of safety regulations while overseeing safety operations for the nation’s interstate gas and liquid pipelines as well as all hazardous materials shipments by rail, highway, sea, and air.

She has also served in several other positions within the federal government, including: principal deputy assistant secretary of the U.S. Army for civil works, overseeing policy and budget direction for the U.S. Army Corps of Engineers; vice president for government relations and public policy at the U.S. Postal Service; deputy chief of staff and counsel at the Federal Aviation Administration; special assistant to the chairman at the National Transportation Safety Board; and as special assistant to President Clinton and associate director of presidential personnel in the White House.

Dominguez currently serves as the chief strategy and operations officer for YWCA USA, setting the group’s strategic vision to drive “innovation and growth.” She has a law degree from the Villanova University School of Law and bachelor of arts degree in American studies from Smith College.