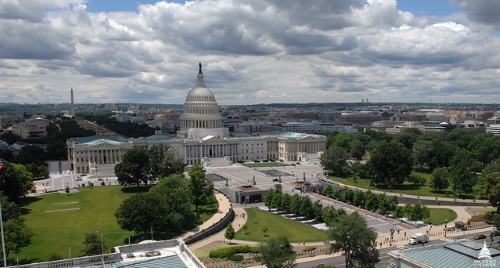 Members of the House of Representatives Committee on Transportation and Infrastructure sent a letter to House Speaker Rep. Nancy Pelosi, D-Calif., and Minority Leader Rep. Kevin McCarthy, R-Calif., to request the repeal of a $7.6 billion surface transportation budget rescission due to go into effect next year, as well as release of $9.3 billion in revenues “sitting idle” in the Harbor Maintenance Trust Fund.

[Above photo via the Architect of the Capitol.]

“Regardless of the amount rescinded from each state, the rescission will significantly limit the flexibility of all states and impact the ability to plan and execute highway and bridge projects,” the House T&I committee leaders said in their letter. “These projects are necessary in order to grow the U.S. economy, create jobs, and ensure the Nation’s global competitiveness. We therefore request that the rescission be repealed as part of any budget agreement.”

Jim Tymon, executive director of the American Association of State Highway and Transportation Officials, said the rescission is a major concern for state DOTs because it impedes the ability of states to meet their individual infrastructure needs and disrupts transportation planning and timely delivery of projects.

“The rescission will result in real cuts to transportation funding and it will cause delays in project construction at a time that both Congress and the Administration are looking to increase transportation investments,” he said. “AASHTO and our state DOT members have been working to educate Congress on the impacts of the rescission and we applaud this effort by the House T&I Committee leaders.”

Meanwhile, the House T&I letter also sought leadership support for H.R. 2440 – formerly H.R. 2396, a bill entitled the Full Utilization of the Harbor Maintenance Trust Fund Act – that the committee passed by voice vote on May 8. That bill seeks to “free up” some $9.3 billion in “already collected revenue that sits idle in the U.S. Treasury, not being used for its intended purpose of investing in our nation’s ports and harbors.”

“Congress created the HMTF to pay for the operations and maintenance needs of the nation’s roughly 1,067 harbors and shipping channels under the jurisdiction of the Army Corps of Engineers,” the House T&I letter stated. “Over the past decades, Congress has appropriated to the Corps far less revenue than has been collected from shippers. As a result … there is enough money to cover the entire maintenance backlog without raising a dime in taxes or borrowing from the Treasury.”

While the letter said H.R. 2440 is being reported out “in a bipartisan manner … given that a budget agreement will be looking at discretionary spending on the whole, it would be appropriate to include a discretionary cap adjustment for the HMTF in any such deal.  This would be the only such adjustment covered by actual revenues.”