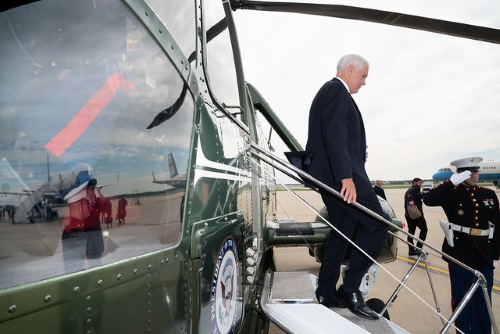 Both of those efforts could be a boon to state departments of transportation involved in commercial space efforts, such as the Florida DOT’s Spaceport Improvement Program.

“The companies in the commercial space industry have not only been an important part of our economic success … they are critical to the success of our nation and to the advancement of our ideals in the vast expanse of space,” Pence explained in his May 6 speech in Washington D.C. at the Satellite 2019 Conference.

“The work that each of you do here on Earth, in the skies, and in space spurs scientific discovery [and] drives innovation,” he said. “Space companies have driven incredible economic growth here in the United States and, frankly, around the world. Just two years ago, the satellite industry alone generated $350 billion in revenue. And studies predict that number will increase to more than a trillion dollars annually over the next two decades.”

Pence added that $18 billion has also been invested in companies throughout the space industry in the last decade, in part to help maintain and expand the network of commercial satellite orbiting the globe.

“We’ve been streamlining the licensing regimes that oversee launch, re-entry, and new commercial operations in space — removing unnecessary regulations that have increased costs and stifled innovation,” he said.

“We’ve also developed our nation’s first comprehensive space traffic management policy to help you navigate the thousands of satellites and other manmade objects orbiting the Earth at this very moment,” Pence emphasized. “And this summer, I’m proud to say, the Department of Commerce will unveil the first part of its open-architecture data repository, which will provide access to a basic level of “space situational awareness,” based on both commercial data and the space catalog compiled by the Department of Defense. We’re bringing the data together so that companies just like yours have the best real-time information to navigate in space.”

Those efforts dovetail with Florida DOT’s outlook on how to best support growth in commercial space activity.

“Today, commercial space transportation systems are privately owned and operated in support of a wide diversity of both governmental and commercial customers requiring delivery of cargo or people to space,” the agency explained in its 2018 Spaceport Improvement Program handbook.

“Commercial investment in space and in space transportation is driving the requirements for spaceport sites, operating environments, and infrastructure,” Florida DOT noted. “There is growing competition among states and nations to host this rapidly evolving component of the transportation industry.”

And it’s a transportation sector that is in need of greater data transmitting capabilities, which is why Pence stressed why activating next generation 5G wireless networks remains a key focus of the Trump administration.

“To give the engineers and entrepreneurs here today the tools you need to continue driving American innovation, we will ensure that you have continued access to wireless spectrum,” he said.

“Today, spectrum is more valuable than ever, as more industries begin to make use of the next generation of wireless networks — 5G,” the vice president emphasized. “This revolutionary technology will improve the way in which Americans work, learn, travel, farm, run businesses, and communicate — from the cellphones in our pockets to the autonomous cars on the roads someday.”

But as spectrum bandwidth is limited, and to ensure that it is used “as efficiently and effectively as possible,” Pence said President Trump remains focused on “increasing spectrum access for all users” and to “give innovators in all industries access to the spectrum you need to compete and win in the global marketplace, including all of you here in the space industry.”