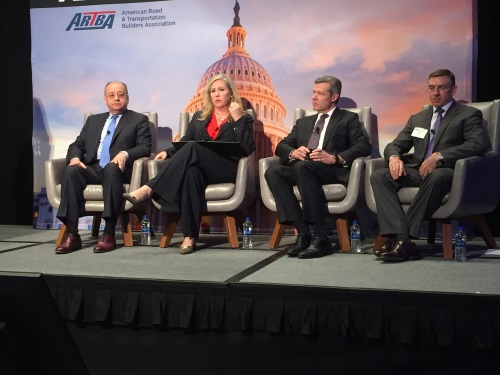 A panel discussion May 14 held in Washington, D.C., during a legislative summit sponsored by the American Road & Transportation Builders Association focused on the major infrastructure issues facing the United States, especially in terms of generating more funding for transportation projects.

“The message we’re trying to get out there is that [transportation] not just about building roads like it was 30 years ago. It’s about maintaining what we have, operating it as efficiently as possible, and using all modes as part of a larger mobility network,” explained Jim Tymon, executive director of the American Association of State Highway and Transportation Officials.

“Transportation really has an impact on quality of life and it is one of the few areas where we can come together in a bipartisan fashion,” he said.

Tymon also remained “cautiously optimistic” that some sort of infrastructure package will be agreed upon and passed by Congress and President Trump. “Will it be $2 trillion? $1 trillion? We will take what we can get,” he noted. “But any kind of [infrastructure] package will have to address the highway trust fund shortfall and the time window is getting tight to do it. Because, come Jan. 1 next year, everything will be locked down for the 2020 presidential election.”

Like AASHTO’s Tymon, Linda Bauer Darr, president and CEO of the American Council of Engineering Companies, said she remains “optimistic that something is going to happen – the only question is how big that something will be.”

The key sticking point is how to pay for it, she noted. “[Members of Congress] will not stick their necks out until the president explains how to pay for it. You can’t not have the money. There are lots of infrastructure plans out there – take your pick – but it is where will the money come from that will decide everything.”

Dave Bauer, ARTBA’s president and CEO, agreed with that assessment but with a key twist: “We must embrace the commitment to improve the entire transportation infrastructure network [and] more money is certainly important. But we must clearly articulate what we will achieve with those resources.”

He added that it is “on us to make them understand the benefits” of increased infrastructure investment.

Paul Skoutelas, president and CEO of the American Public Transportation Association, described that view this way: “If you go to the dance, you have to dance.”

He added that “it is an amazing time in the sense that everyone is talking infrastructure, where there is this appetite for action.” To that end, Skoutelas said “we must make sure we are ready to act” when an infrastructure package is unveiled.

“We know things can turn on a dime so we need to be ready, be engaged. Our position is: tell the story about infrastructure. We think the justification speaks for itself but, but we need to remind people about the benefits of it. And our recent survey suggests the American people are ready for greater infrastructure investment, with improved mobility a big reason for it.”

AASHTO’s Tymon added that not only is “data out there showing public support” for more infrastructure funding, there is data showing that legislators won’t suffer repercussions if they support increased funding.