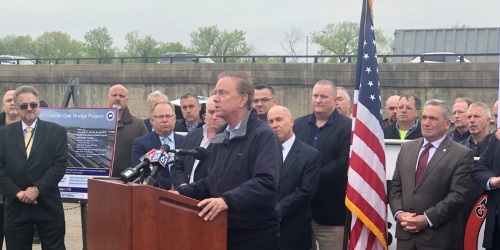 At a press event on May 10, Connecticut Governor Ned Lamont (D) vowed to fix “notorious problem areas of traffic congestion” as part of a sought-after transportation funding measure, specifically focusing on Exit 29 on I-91 northbound in Hartford.

He noted at the event that Exit 29 is one of several being targeted by the Connecticut Department of Transportation as part of a new “congestion-buster project” aimed at alleviating the backups that have become all too common.

Considered to be one of the worst bottlenecks in the country, Gov. Lamont said the Exit 29 ramp connects drivers through a single lane of traffic over the Charter Oak Bridge, leading to Routes 5 and 15, and I-84.

Due to a combination of factors, traffic at the exit ramp frequently backs up onto I-91 for more than a mile or more – a condition that is exacerbated by the tendency of drivers to cut into the right-lane queue from the center lane, drastically reducing the capacity of the center lane and blocking traffic on I-91.

The governor said CTDOT plans to fix that exit by relocating and constructing a new, two-lane exit ramp that will double the capacity and improve the geometry of the connector, relieving the bottleneck.

Gov. Lamont explained more such congestion alleviation projects like this could be started elsewhere around the state if “a consistent, stable source of revenue for transportation funding is implemented.”

“The people of Connecticut are sick and tired of sitting in traffic on outdated roadways that cannot handle the capacity of a 21st century transit system,” the governor wrote.

“Let’s give our state modernized infrastructure that expands our ability to grow and compete,” he said. “Connecticut needs a long-term solution to fix the 30-year patchwork that has left our state with a gaping fiscal hole that needs to be fixed. If this was an easy choice, it would have been made decades ago – we were elected to make the tough decisions that will move our state forward, and now is the time do to that.”

In response, Connecticut Republican lawmakers unveiled a five-step transportation improvement strategy on May 16 that includes: the dedication of $375 million in general obligation bonding for transportation needs annually for the next five years; re-establish the Transportation Strategy and Advisory Board to increase public involvement and oversight of transportation investments, planning, and projects;  and allow Connecticut to explore public private partnerships with public input and legislative oversight.

Gov. Lamont responded in a twitter post by characterizing that strategy as “nothing more than a plan to study” and borrow more money.