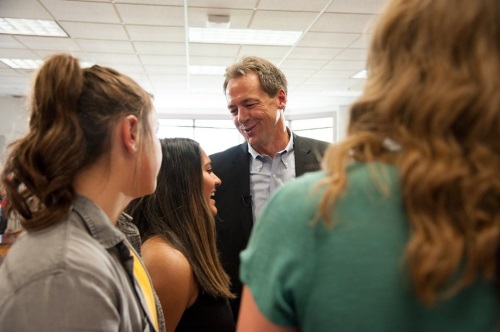 Governor Steve Bullock (D) of Montana (seen above) signed into law $400 million worth of infrastructure legislation on May 10, shortly before announcing his candidacy for the U.S. presidency.

“These long-term investments in every corner of Montana will have a lasting impact that allow urban and rural communities to sustain strong economic growth,” Gov. Bullock said in a statement regarding the nine bills that fund $400 million worth of projects “that will provide clean drinking water, safe wastewater, storm systems, bridges and buildings.”

[Above photo by the Montana Governor’s Office.]

Specific projects include a new Montana Heritage Center, the renovation of Romney Hall at Montana State University, a new dental laboratory at Great Falls College, the repair or replacement of 14 bridges, plus construction of 51 water, wastewater, and storm system projects.

According to news reports, one of the infrastructure measures signed by Gov. Bullock sets “guidelines” to determine how much money the state can afford to borrow and spend on building construction and maintenance, based on state revenues and existing debt. Those guidelines helped clear the way for legislation to sell about $80 million in bonds for infrastructure projects