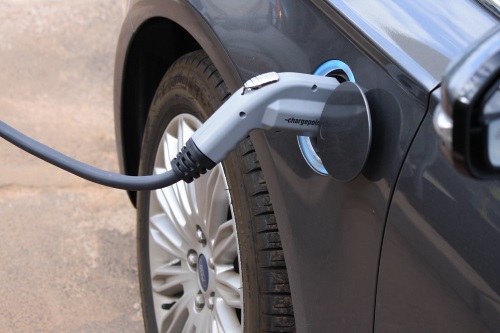 [Above photo by Noya Fields.]

It requires that by 2030, 50 percent of new passenger vehicle sales would be ZEVs, ramping up 5 percent each year to 100 percent by 2040. The bill’s ZEV standard is only applied to the sale of new cars, Sen. Merkley said in a statement.

“This legislation embraces the opportunity for America to sell to the world the revolutionary technology that will make our air cleaner, communities healthier, and workforce stronger,” he said. “If we lead the world in cutting-edge vehicle deployment, we can beat our global competitors, create good jobs here in America, and win the innovation race for new technologies.”

Rep. Levin noted that 10 states currently require that a certain percentage of new vehicles sold within the state must be ZEVs and while state commitments like these play a “vital role” in the transition to electric and zero-emission vehicles, a federal policy is needed to ensure the entire country experiences the benefits of ZEVs, he stressed.

This is but the latest electric vehicle-related legislation to be proposed in 2019.

On April 10, four U.S. Senators and one member of the House of Representatives introduced a bill that would both maintain and extend tax credits for consumers purchasing an eligible electric or hydrogen-powered fuel cell vehicle.

That followed legislation re-introduced by Sen. John Barrasso, R-Wyo., and Rep. Jason Smith, R-Mo., on Feb. 6 that seeks to end electric vehicle federal tax credits while imposing a fee on operators of all alternatively fueled vehicles – be they powered by electricity, natural gas, hydrogen, etc. – that will be collected over the next 10 years and paid into the Highway Trust Fund.