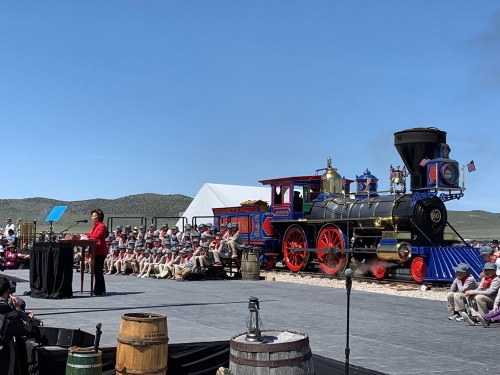 U.S. Secretary of Transportation Elaine Chao gave a keynote address at the 150th Anniversary of the Golden Spike ceremony in Ogden, Utah, on May 11; an event that celebrated the completion of America’s First Transcontinental Railroad.

“The transcontinental railroad was a tremendous feat of engineering, innovation and manpower that was key to the economic development of the United States, and today, we pay special tribute to the diverse workforce — especially the 12,000 or more Chinese laborers — who built this seminal infrastructure project that transformed America,” said Sec. Chao in her speech.

“Within three years of its completion, trains could travel from New York City to San Francisco in just one week,” she noted. “Prior to that, travelers endured up to six months or more of dangerous travel by ship or covered wagon to cross the continent.”

She explained that the ability to move people and goods across the continent, at much reduced time and lower cost, led to explosive economic growth for the nation as a whole.

“The benefits were felt not only in the big coastal cities, but in the rural interior, which gained access to new markets,” Sec. Chao said. “Within 10 years of completion, the intercontinental railroads were shipping $50 million of freight from coast to coast each year.”

In constructing the transcontinental railroad from the East, the Union Pacific hired largely Irish immigrants to lay track across the Great Plains, USDOT noted in a statement, while the Central Pacific Railroad hired 15,000 workers – most of them Chinese – to construct the rail line from the West.

The workers of Chinese ancestry blasted and chiseled their way through the rugged Sierra Nevada mountains, USDOT noted. Using manual hammer drills, pickaxes and explosives, they dug 15 tunnels through hard granite and snow fell so deeply in the mountains that they had to build roofs over 37 miles of track so supply trains could make it through.

On top of that, the agency said an estimated 500 to 1,000 Chinese workers lost their lives during the rail line’s construction.

“As the first U. S. Secretary of Transportation of Chinese ancestry, I have the unique and moving opportunity to fully acknowledge and recognize the contributions and sacrifices of the laborers of Chinese heritage to the construction of the transcontinental railroad,” Sec. Chao noted in her remarks.

“This great history, which helped transform our country, was made possible by a diverse group of brave and determined workers,” she added. “The railroad laborers and innovators of 150 years ago who helped unite our country is every bit as consequential as the digital revolution that binds the world together today.”