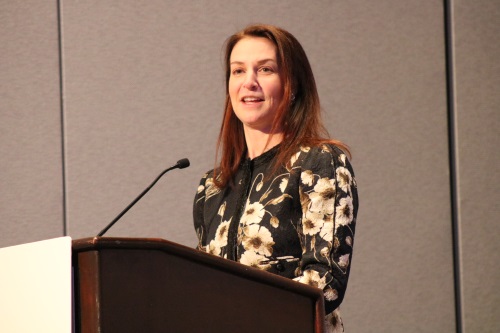 Nicole Nason, fresh from her recent confirmation as administrator of the Federal Highway Administration, stressed in remarks at the American Association of State Highway and Transportation Officials 2019 spring meeting in Park City, UT, that safety and workforce development will be among her critical priorities during her tenure at the agency.

[Above photo by the American Road & Transportation Builders Association.]

“Coming back to U.S. Department of Transportation after over a decade has been interesting,” she said. “When I last served in the department in 2007, highway fatalities reached 41,059. Today, they average 37,000 a year – and after 10 years, that’s just not enough progress. We’ve improved highway designs and construction work zones, while cars and trucks have more safety features than ever. And yet we still have 37,000-plus fatalities on our roads every year.”

Thus Nason said safety will be main focus for her at FHWA but “especially a focus on pedestrian safety. I did not get time to focus on that NHTSA [National Highway Traffic Safety Administration] administrator,” she explained. “I am also very interested in active transportation – I would love to get more involved and plug in where I can.”

Nason added that while discussions in Washington D.C. “evolve” over investing in the nation’s transportation infrastructure, “there is very high level bipartisan agreement that infrastructure is a critical issue; so I am encouraging you not to throw in the towel just yet” in terms of the willingness of President Trump and Congress to make a deal.

“We need to improve transportation infrastructure – and this group knows better than anyone, anywhere, that roads and bridges are the backbone of our economy,” she said.

However, Nason noted that there are “countless new technologies” now being deployed that will “change the way we travel, transport goods, and connect with one another.”

“Seven years ago my daughter came home after school and showed me the luggage tag she made with a 3D printer as an after school project,” she explained.

“I looked at it and said, ‘That’s nice.’ Then, recently, my son comes home and shows me the replica of Millennium Falcon he made using a 3D printer after school. I said, ‘this is amazing!’ But he was very nonplussed and nonchalant about it,” Nason added. “I took two important lessons away from this: one, technology moving so very quickly now. And, second, was my son’s attitude: it highlights the high expectations ‘Generation Z’ has for what we’re going to be able to do for them. It’s in the ‘water table’ now among 10 and 12 year olds that cars will very soon drive themselves.”

“Even as we streamline [permitting] processes and implement innovations, workforce development remains a priority,” she said.

“We know the nation depends on the highway system – and the highway system relies on qualified workers maintaining and repairing it; that’s an issue we feel all the time,” Nason noted. “We need to make clear that there is a path to leadership opportunities for maintenance personnel. But it is challenging. And we understand this worker shortage is going to get worse before it gets better, so we need to take action now.”