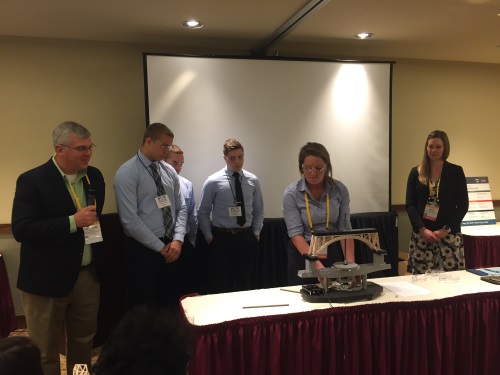 After the “dust” settled from cracked balsa-wood trusses and snapped string cables, three teams of students from Michigan took home top honors at the 2019 American Association of State Highway and Transportation Officials National Bridge Challenge competition; an event that is part of the organization’s annual spring meeting, held this year in Park City, UT.

The National Bridge Challenge is part of the Transportation and Civil Engineering or TRAC program that teaches secondary school students from 7th through 12th grade how to apply a variety of math and science concepts to common engineering problems occurring in the development of transportation systems.

This year’s National Bridge Challenge, held in Park City on May 21, collected 370 applications from 23 states participating in the TRAC program that were then narrowed down to a field of 132 semi-finalist teams – each team comprised of three students and one teacher – before being whittled down to a final round of 18 teams from six states: Michigan, Mississippi, Maryland, Florida, Louisiana, and California.

Over a nearly eight-month period, student teams participating in the contest built model bridges made from kits provided by the TRAC program that included glue and balsa wood. They then used Model Smart and Bentley software to design their bridges, built prototypes, and used destructive testing to gauge the upper limits of the strength-to-weight ratio of their designs.

The all-day national contest began with team presentations regarding the design and testing process of their bridges before a panel of judges, followed by destructive testing of their bridge models. Winners were selected based on points awarded for their presentations and for the performance of their models in destructive testing, with all team members receiving medals. Cash prizes were also awarded, with first place teams getting $1,200, second place teams $900, and third place teams $600.

In the 7th and 8th grade division, the winners were:

In the 9th and 10th grade division, the winners were:

In the 11th and 12th grade division, the winners were:

The EKR Miner Construction team also established a record-setting mark with their bridge model, as it withstood 406 pounds of force before blowing apart in spectacular fashion during the destructive testing phase of the competition (which can be viewed starting at the 26:03-minute mark in the livestream video recorded by the Utah Department of Transportation below.)

Matt Dunn, assistant district engineer of maintenance with the Mississippi Department of Transportation, served as the announcer for the event and noted that all of the students participating in the competition represented “the future” of the transportation industry.

“The students of the future presenting here are unbelievable,” added Carlos Braceras, Utah DOT’s executive director and AASHTO’s 2018-2019 president, during the event. “We hope to help them design their future through such competitions, for we never have enough engineers in transportation.”