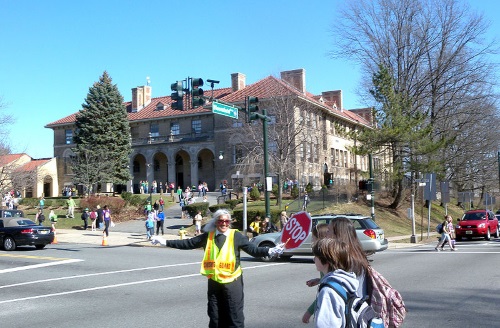 On May 16, the New Jersey Department of Transportation in partnership with the North Jersey Transportation Planning Authority awarded nearly $20 million in 27 federal grants to local communities under the Safe Routes to School and Transportation Alternatives Set-Asides programs.

[Above photo by Jim Henderson via Wikimedia Commons.]

The SRTS, established in 2005, encourages children – including those with disabilities – to walk and bike to school. The 11 grants totaling $5.8 million provided by NJDOT and NJTPA will provide local governments funds for infrastructure improvement projects that include the construction of sidewalks, bikeway lanes, and multi-use paths, along with the installation of new crosswalks, school-zone markings, and speed-limit signs.

Meanwhile, the 16 grants totaling $13.99 million awarded to the TA Set-Asides program – established by Congress in 2012 and funded through a set aside of the Federal Aid Highway program – go towards “non-traditional” projects that strengthen the “cultural, aesthetic, and environmental aspects” of the nation’s intermodal system.

That includes projects aimed at reducing vehicle-caused wildlife mortality as well as the conversion and use of abandoned railroad corridors to trails for pedestrians, bicyclists, and other non-motorized transportation users, NJDOT noted in a statement.

The agency will also be modifying the application schedule by making municipal aid funds available sooner, as the vast majority of New Jersey’s towns and cities operate on a calendar fiscal year running from January 1 through December 31.

“By proactively helping local governments succeed in spending all the transportation dollars afforded them, we ensure the entire transportation network functions efficiently and effectively,” she said.

“It is in all our interests to make sure we award as many grants as possible and that those projects are successfully completed,” Gutierrez-Scaccetti added. “Every project that is brought to completion is a benefit to that community and the transportation system as a whole. I want to make sure that as an agency the NJDOT does everything it can reasonably do to help our local governments flourish.”