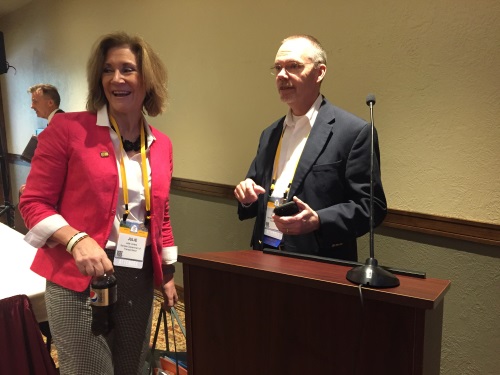 A greater emphasis needs to be placed on safety by state departments of transportation, according to a panel discussion held at the American Association of State Highway and Transportation Officials 2019 spring meeting in Park City, UT.

Mike Tooley (above right, with Julie Lorenz at left), director of the Montana Department of Transportation, moderated the panel discussion and noted that, “safety needs to be our most important job, because, if you can’t survive the trip, transportation becomes a quality of life and public health issue.”

Tooley – recently named chairman of AASHTO’s Committee on Safety and a 28-year veteran of the Montana State Highway Patrol – said “we need to have more conversations and change the culture not only in our departments but with the people behind the wheel [of motor vehicles]. The person behind the wheel needs to adopt a culture of safety; we can’t engineer our way out of this. The whole goal is to move to zero fatalities because no other number is acceptable.”

Julie Lorenz, secretary of the Kansas Department of Transportation, echoed Tooley’s point, noting that “we do not have the same urgency for safety in the public sector as there is in the private sector.”

She stressed that state DOTs “have to push safety every single day; that will inform everything I do as long as I have this job.”

Shawn Wilson, secretary of the Louisiana Department of Transportation and Development and recently appointed chair of AASHTO’s Agency Administration Managing Committee, said more than 700 people were killed in fatal crashes on his state’s roads in 2018, generating $8.6 billion a year in crash-related spending.

“The key thing is, who are the people involved in these crashes? Many, we are finding out, are tourists. We are also finding drugged driving is a big issue, with opioids and marijuana, as well as distracted driving. We’ve also seen an alarming uptick in pedestrian and bicycle fatalities – they’re up 20 percent – so we’re trying to be more progressive with the adoption of national standards to protect those users.”

He added, however, that funding is an issue. “We’re only spending $60 million to $70 million a year on safety. And I like to say we have a wheelbarrow full of needs for transportation but only a thimbleful of funds,” Wilson stressed. “So we need to make better decisions with that funding so we can save more lives and reduce deaths on our system.”

Yet Jay Norris, director of safety at the Tennessee Department of Transportation, emphasized that overcoming such challenges is what state DOTs do best. “We’ve dealt with flooding, tornadoes, wildfires; we can deal with this,” he said. “Our people are our most important resource.”

To that end, Ed Hassinger (at podium in photo at right), deputy director and chief engineer of the Missouri Department of Transportation, noted that a “realignment of values and mission statements” is one tactic his agency is employing to “deal” with the safety issue.

“Safety, service, and stability is now our mantra,” he said. “We are realigning the things we’re doing around safety. For example, we used to allocate our safety funds based on the number of crashes that occurred on particular roadways. Now we’re allocating them based on fatalities and rate our [transportation] projects on how well they can contribute to reduced fatalities. We’re putting our money where our mouth is when it comes to safety.”

George McAuley, deputy secretary of highway administration for the Pennsylvania Department of Transportation and the new chair of the steering committee guiding the AASHTO Innovation Initiative, added that 94 percent of all motor vehicle crashes have a “human behavior component,” according to data collected by the National Highway Traffic Safety Administration. And one way of reducing if not eliminating that as a safety issue is the broad deployment of connected and autonomous vehicles or CAVs.

“CAVs offer a huge opportunity to reduce [fatality] numbers,” he explained. “I don’t know how that future trends out, but the advantage is that human behavior factors go away as a factor if CAVs are deployed widely over the next decade. So by 2030 and 2040 we could witness a huge decline in [traffic] fatalities. It’s not that far out – in 10 years I think we’ll see quite a bit of [CAV] volume. So we need to make sure our infrastructure is aligned and ready for it.”

Roger Millar (at podium in photo at right), secretary of the Washington Department of Transportation, noted that most state DOTs won’t have enough money to do everything they need to do when it comes to safety improvements. “Thus we’ll need more data-driven processes that will provide a basis for regional administrators and others to make targeted investments with the resources we have,” he said.

Millar emphasized that “this needs to become a real focus” for state DOTs for “as we encourage more people to walk and ride bicycles to be healthier, we don’t want them to be killed doing it. Roughly 40 percent of the trips people take go less than five miles. But they take the vast majority of those trips in cars because it is the only way to do it safely. So we need to change our design standards from ones highly-oriented around passenger vehicle mobility to personal mobility; ones not focusing on the mobility ‘containers’ we use to move around.”

He also noted that “this can be a very polarizing conversation, so we need to bring data and safety perspective to it. We need to recognize effective designs can provide optimal safety performance. And we’re really interested in ‘mobility on demand’ or ‘mobility as a service’ as they’ll help us bring more tools to the transportation game.”