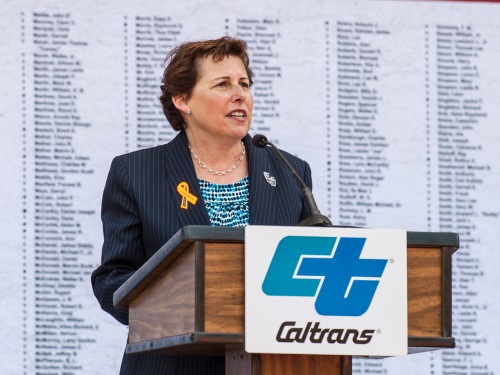 California Department of Transportation Director Laurie Berman (seen above) is planning to retire on June 29, closing the books on a 36-year career at the agency.

“I have decided it is time to retire,” Berman said in a May 28 email to Caltrans’ staff. “I have loved everything about the past 36 years, from my very first assignment as a bridge inspector working on the Wheeler Ridge truck weighing station outside of Bakersfield to my very last assignment as director. We are indeed a family at Caltrans and it is each one of you who makes this a place I have loved for 36 years. It has been quite a ride.”

Berman began her career at Caltrans in 1983 as a junior civil engineer after graduating from Michigan State University in East Lansing. Since then, her work encompassed time as district director in the San Diego area, where she oversaw groundbreaking for the Interstate 5 north coast corridor project as well as the formation of California’s first public-private partnership, the State Route 125 project.

When appointed director last year, Berman emphasized that “transportation plays a vital role in the state’s economy and livability for every Californian” and during her 14-month tenure took a keen interest in how climate change could impact California’s transportation infrastructure – particularly with the publication of two “vulnerability assessment reports” last December.

“Climate change is an immediate and escalating threat to California and its transportation system, and Caltrans is being proactive,” noted Berman in a statement at the time. “We are looking at where the state highway system is vulnerable, so we can address issues moving forward.”

Now Berman said she looks forward to starting a “different chapter” in her life.

“It seems like just yesterday that I was driving cross-country from Michigan to start a new chapter of my life away from my family and friends and everything I knew to embark on my first real job,” she explained in her email to Caltrans’ staff.

“And while I will no longer be working with you, I’ll always be cheering you on from the sidelines,” Berman added. “This is an amazing organization filled with amazing, smart, and dedicated people. It’s the people doing the work – all of you – that I will miss the most.”