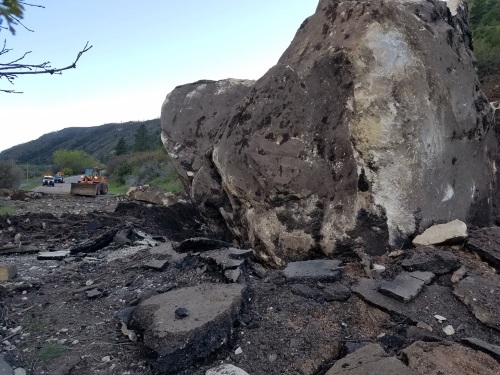 A massive boulder weighing some 1,150 tons – some 2.3 million pounds – tumbled down about 1,000 feet on May 24 as part of a major rock slide that ended up blocking a section of the two-lane highway linking the Colorado towns of Cortez and Telluride.

The boulder proved so large that the Colorado Department of Transportation used explosives to pulverize it so it and other debris from the rock slide could be cleared from the roadway.

The agency added that a second 8.5-million-pound boulder rolled across the highway, leaving in its wake a wide 8-foot-deep trench in the road’s surface it filled in and repaired.

The Colorado DOT noted on its Facebook page that its maintenance division had to build a temporary dirt road as part of a detour around the rockslide area, as that two-lane highway is the only direct surface transportation between the towns of Cortez and Telluride. That dirt-road detour – controlled by a portable stoplight array – allows for one-lane alternating traffic around the rock fall area.