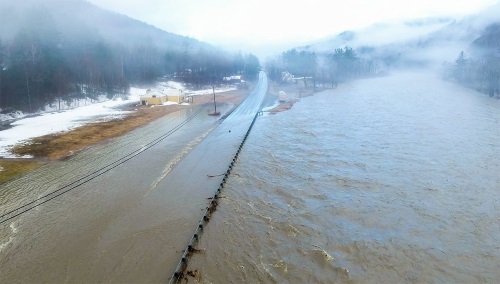 The Federal Highway Administration issued $500,000 in “quick release” Emergency Relief funds on May 28 to help the Vermont Agency of Transportation repair roads damaged by flooding in mid-April.

Rapid runoff as the result of heavy rain and snowmelt created floods that damaged roads in eight Vermont counties, with the cost of long-term repairs to all of the public infrastructure affected by the flooding expected to total $2 million, FHWA said in a statement.

Aerial footage of some of the flood-affected regions collected by the Vermont Agency of Agriculture showed roads swamped in some cases by nearly a foot of water.

“This was a destructive event and it will be tough for these towns to recover,” Gov. Scott said in a statement. “Emergency responders did an outstanding job protecting the public from harm during the floods, and road crews have worked hard since then to rebuild. Recovery has been and will continue to be long and expensive, so communities are very much in need of federal assistance.”