State DOTs Work to Turn up the Heat on Human Trafficking 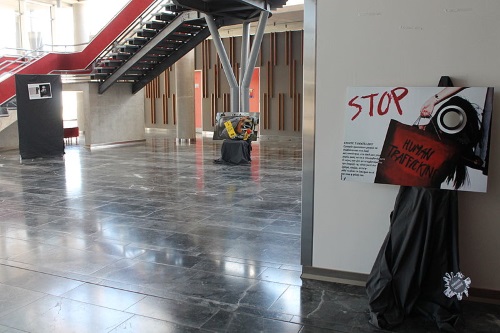 Efforts to thwart human trafficking are increasing among state departments of transportation, though there is still a ways to go in terms of spurring “deeper engagement” on their part.

[Above photo by Savvas Alexandrou via Wikimedia Commons.]

Data from an ongoing survey of anti-human trafficking efforts by state DOTs – entitled “State DOT Contributions to the Study, Investigation, and Interdiction of Human Trafficking” – indicates 45 percent of the agencies participating in poll are either “highly” or “moderately” engaged in such efforts.

Paula Hammond, senior vice president at consulting firm WSP USA – which is conducting the survey for the National Cooperative Highway Research Program overseen by the Transportation Research Board – noted in a May 23 presentation during the American Association of State Highway and Transportation Officials spring meeting in Park City, UT, that this survey so far has achieved a 70 percent response rate within the state DOT community.

On top of that, she said 19 of 36 participating state DOTs have “volunteered to be interviewed” in more detail about their anti-human trafficking efforts and where improvements to those efforts can be made.

“We have a big educational opportunity within the state DOT community,” Hammond noted. “We’ve also found that state DOTs can supply data, knowledge, and expertise to law enforcement to help stop human trafficking. So our next step, as we move from the broad survey to more detailed interviews and case studies with state DOTs active in this area is to help others learn ‘best practices’ from them, as well as how to fill any existing gaps.”

She added that “we’re also trying to do this in alignment with federal agencies so there is not a duplication of work.”

In the meantime, many state DOTs are working on their own to coordinate their anti-human trafficking efforts with other federal, state, and local agencies while beefing up internal training efforts.

“PennDOT has partnered with the Pennsylvania Public Transit Association, an umbrella organization for regional transit agencies, as well as the Pennsylvania Turnpike to combat [human] trafficking,” Colton Brown, program manager for the Pennsylvania Department of Transportation’s public transit bureau, explained to the AASHTO Journal in an email.

Brown also pointed out that PennDOT has taken a “two-pronged approach” to trafficking education: to provide a baseline level of training for all employees and to encourage all Pennsylvanians to learn more about how they can combat human trafficking wherever they live.

Stephanie Johnson, assistant director for planning at the Delaware Department of Transportation, added in a separate email to the AASHTO Journal that her agency is currently gathering training resources, data, and information to develop department-wide training for all staff to build awareness about human trafficking.

“Our goal is to first train our frontline staff including our maintenance personnel, toll booth operators, traffic personnel, and construction engineers,” Johnson said. “At the same time, we plan to work closely with DART – DelDOT’s Transit Agency – and their training staff to develop training for bus operators and other transit workers.”

She noted that her agency’s “ultimate goal” is to have ALL DelDOT/DART employees trained regarding human trafficking awareness and incorporate said training into the orientation process for new employees as well.

“As more training resources are provided through DHS [the U.S. Department of Homeland Security], FHWA [the Federal Highway Administration], and FTA [the Federal Transit Administration], we will continue to build and enhance this training to ensure all staff are informed, know how to recognize signs and what to do when human trafficking is suspected,” Johnson emphasized.