Maryland Gets the Go-Ahead for $11B Public-Private Highway Partnership 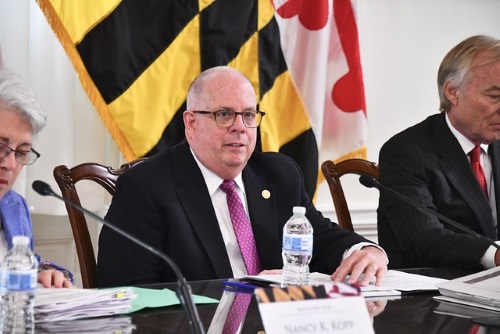 “This transformative project is about finally moving forward and taking action on an issue that elected officials have literally ignored for decades,” the governor (seen above) said. “It will result in less traffic, more peace of mind, cleaner air, and a much better quality of life for hundreds of thousands of Marylanders for decades to come.”

The Board of Public Works also approved Gov. Hogan’s request to designate improvements to I-270 as the “first phase” of the project. With a clearer consensus for making improvements on I-270, he explained, this will allow more time for local residents to convince leaders in Montgomery and Prince George’s Counties of the need for traffic relief on I-495 and the American Legion Bridge before the state moves forward with the planned Phase Two and Phase Three of the project.

“This will allow a couple more years of input, study, and debate and more time for the overwhelming majority of citizens and the hundreds of thousands of commuters who sit in that traffic to convince their local leaders that they desperately want to relieve this traffic congestion on the Beltway,” he pointed out, noting that the Board of Public Works will hold separate approval votes for each phase of the project.

One condition of the deal’s approval requires the Maryland Department of Transportation will also dedicate 10 percent of the state’s portion of toll revenue gained from this P3 project to regional transit projects. Other conditions agreed to by the agency include: conducting an I-270 monorail feasibility study; allowing local transit buses to use the managed toll lanes at no charge; and to not take any right of way until the federal National Environmental Policy Act or NEPA process is completed.

“The NEPA process and the environmental impact studies for the entire plan can continue to proceed on all three phases, so that if and when the citizens and their local elected representatives decide that they do want to move forward on traffic relief, they will not have to experience another decade – or decades – of needless delay,” Gov. Hogan pointed out.

The Maryland DOT conducted several high-profile public meetings to highlight the need for this P3 highway project, the most recent at the Hilton Baltimore Washington International Airport Hotel.

Maryland DOT Secretary Pete Rahn noted at that meeting that the cost of congestion in the National Capital Region grew to nearly $1.3 billion in 2016 – a cost he said will only continue to grow as the population in the region is expected to increase by 1.2 million by 2040.

“Maryland has the second highest commuting times in the nation and the National Capital Region faces the nation’s worst congestion,” he explained. “We need innovations to relieve congestion and we’re inviting the private industry to address the transportation challenges on Maryland’s most congested roads.”