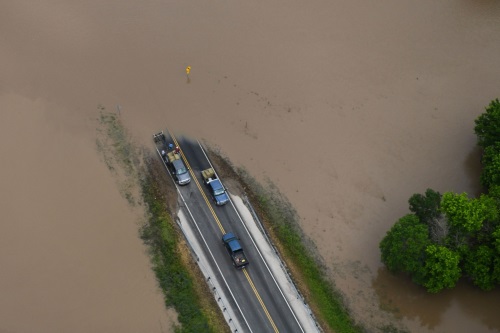 Record-setting storms and flooding continue to force the closure of roads and bridges on the National Highway System by the dozens in states throughout the Midwest, according to the Federal Highway Administration – especially in Missouri, Illinois, Iowa, Kansas, Arkansas, Oklahoma, and Nebraska.

The FHWA said in a statement on May 31 that it continues to coordinate with state department of transportation officials in affected areas and stands ready to assist impacted states with emergency relief needs, including funding, detour routes and any technical assistance for bridge and/or roadway repairs after water recedes.

Damages to roads and bridges caused by recent storms and flooding over the first half of 2019 are among the costliest in recent memory, the agency added, noting that since January, FHWA has directed $54.9 million in “quick release” emergency relief or ER funds to help states repair roads and bridges nationwide – roughly three times higher than the $19.8 million awarded during the same period in 2018.

The South Dakota Department of Transportation is the most recent recipient of such ER funding, getting $1.5 million from FHWA to cope with what’s expected to be $9 million in overall damage to road surfaces, culverts, and bridge decks.

The agency noted in a statement that a severe winter storm in mid-March dropped wet heavy snow across a majority of South Dakota in a short timeframe that resulted in extensive flooding after temperatures subsequently increased – washing out roads, bridge approaches, and leaving many bridges partly submerged.

The flooding is so bad that the Federal Railroad Administration said it constitutes an “emergency event” as related to railroad operations. In making this determination, the FRA noted in a statement that “historic flooding” throughout the region is causing power outages along with breached dams and levees.

In a June 4 visit to Tulsa, OK, Vice President Pence noted during a press event that there had been 800 incidents of flooding and severe storms and tornadoes in the state of Oklahoma alone since May 1st.

“We’re all with you at the federal and the state level, and we’re going to help you rebuild your homes and your communities bigger and better than ever before,” the vice president (seen at right) said. “Violent weather like we’ve seen pass through Oklahoma and throughout the Heartland has an enormous cost on families, on residences, on businesses, on farmers, and ranchers.”

The White House also approved Oklahoma’s request for disaster assistance on June 2 for three of its most flood-ravaged counties as well.

Tim Gatz – executive director of the Oklahoma Department of Transportation and Oklahoma’s secretary of transportation as well – noted in news reports that his agency has spent $2 million on emergency response efforts so far, but expects that amount to increase as the floodwaters recede and the full extent of damage to Oklahoma’s roads and bridges is revealed.

“I’ve seen flood events like this that will go into the five or tens of millions of dollars,” Gatz explained in an interview with The Oklahoman, adding that the Oklahoma DOT “already knows” it will have to repair some highway shoulders that have crumbled due to water damage. “We’re going to be putting eyes on everything, all of our infrastructure and assets out there that have been impacted by flooding,” he said.

The agency added that there have been 150 highway closures since mid-April in Oklahoma, and as of June 4, some 15 damaged highways remained closed.

Missouri Gov. Mike Parson (R) noted in a June 3 statement that the Missouri State Emergency Management Agency has deployed “flood-fighting resources” in 33 counties within his state, that 28 levee breaches have been reported, and that the Missouri Department of Transportation reports that some 382 roads are closed in 56 counties due to the ongoing flooding. He also activated the Missouri National Guard on May 27 to aid in flood mitigation efforts.

“This is all about people helping people, communities helping communities, and continuing to assist each other during these tough times. Working together, we’re going to battle this flood for the long haul,” Gov. Parson said. “The flooding is devastating, and we’re not out of it yet. Today was about witnessing firsthand how Missourians are rallying together to support each other and sharing with local cities that we are here to help.”

On June 4, Illinois Gov. J.B. Pritzker (D) activated an additional 200 Illinois National Guard soldiers to help fight flooding fight along the Illinois and Mississippi rivers after floodwaters surged over the Nutwood Levee, which forced the closure of Illinois State Route 16. In all, more than 400 guardsmen are reinforcing Illinois’ efforts to fight what the governor called “raging floodwaters” in a statement.

“The State of Illinois will use every resource at its disposal to protect our residents and our communities from devastating floods,” he said, noting that state agencies so far have provided more than three million sandbags, more than 2,700 rolls of plastic, and 27 pumps to assist local communities as they fight rising floodwaters and protect their critical infrastructure.