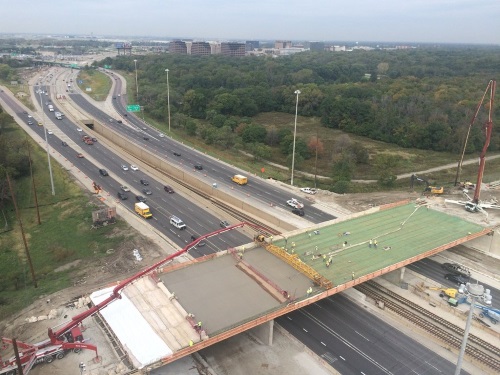 The passage of the six-year, $45 billion “Rebuild Illinois” capital plan in early June by the Illinois legislature and signed by Gov. Jay “J.B.” Pritzker (D) will increase the state’s tax on diesel and gasoline from 19 cents per gallon to 38 cents per gallon and index it to inflation – all part of an effort to make “Illinois a leader on transportation well into the future,” noted State Senator Martin Sandoval, D-Chicago, in a statement.

[Above photo by the Illinois Department of Transportation.]

“We did our due diligence in this process to the tune of eight hearings during which we heard over 23 hours of testimony from more than 140 individuals,” Sandoval said, adding that the 326-page $45 billion plan is the “culmination” of three months of negotiations.

“I think we ended up with a high-quality product that reflects the most urgent needs in Illinois and fairly distributes funds throughout the state,” he noted.

“After years of neglecting our state’s roads, bridges, mass transit, and buildings, Illinoisans’ health and safety have been jeopardized, and job creation has been hindered,” added Gov. Pritzker in a statement.

“The Rebuild Illinois plan will reinvigorate our economy and strengthen our rightful status as the transportation and supply chain hub of the nation. [Rebuilding] our roads, bridges, and communities will create hundreds of thousands of jobs throughout our state.”

The governor released an initial 25-page $41.5 billion outline for the Rebuild Illinois plan in May that aimed to invest $22.9 billion in combined state, federal, and local funds in road and bridge construction over the next six years – monies that included $12 billion in new funding split between state projects (totaling $8 billion) and local projects (totaling $4 billion) to maintain, enhance and upgrade Illinois’ highway network. The plan also includes more than $5 billion for passenger rail and mass transit systems across Illinois.