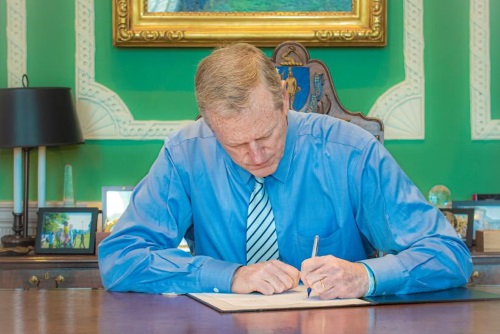 On June 7, Massachusetts Gov. Charlie Baker (R) (seen above) signed into law a funding bill that authorizes $200 million in Chapter 90 transportation funds to be spent on municipal transportation projects across the state.

According to a statement from the governor’s office, the new Chapter 90 funding measure requires cities and towns to submit receipts for their transportation projects to the particular Massachusetts Department of Transportation’s Highway Division district in which they are located, which in turn verifies that the expenditures qualify for reimbursement under Chapter 90. Those districts then file those receipts with MassDOT’s fiscal department, which issues the reimbursements.

“As the Governor’s Commission on the Future of Transportation in the Commonwealth report pointed out, transportation needs, challenges and solutions vary across the state, so it is appropriate that communities have Chapter 90 funds to use on their specific priorities,” said Massachusetts Transportation Secretary and CEO Stephanie Pollack in a statement.

“That is also why the Administration’s additional transportation funding programs are so vital, such as the Municipal Small Bridge Program, Complete Streets Funding Program and Safe Routes to School,” she added.